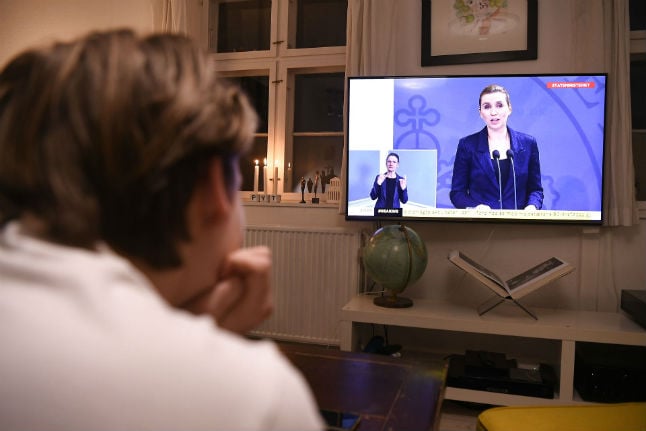 “This is not going to be easy,” Danish Prime Minister Mette Frederiksen admitted as she announced the tough new measures on Tuesday evening, but she said she judged them necessary.

“It is crucial that we break the chain of infection now. At the country's hospitals, the seriousness of the situation is becoming clearer every passing day.
“Nurses, doctors and social and health assistants are saying to the Danes: Stay home now so that the infection does not spread'. Now is the time that we in Denmark must do everything we can.”
READ ALSO:
Does Denmark need to force people to keep their distance?
Coronavirus: Denmark turns away 149 travellers after closing border
MAP: The Danish regions most affected by coronavirus
The Danish broadcaster TV2 reported that the following institutions would be required to shut on Wednesday morning and to remain closed until at least March 30.
Restaurants and cafés will be permitted to continue selling take-away food and drinks.
Health minister Magnus Heunicke told the press conference that the health services were now preparing for a surge in coronavirus patients, with 954 respirators now in place in intensive care wards.
“It is serious now in the Danish health system,” Søren Brostrøm, Director General of the Danish Health Authority, said according to Denmark's public broadcaster DR. “More people are arriving at the intensive care wards and they are extremely seriously ill.”
Thorkild Fogde, Denmark's police chief, said that from tomorrow additional police officers would be out patrolling the streets to enforce the new regulations.
“Police will not enter private homes, and you will not be facing a huge mass of fines for breaking the ban on assemblies of over 10 people, but we will insist the new rules are complied with,” he said. “We will be ready to censor restaurants and cafés.”