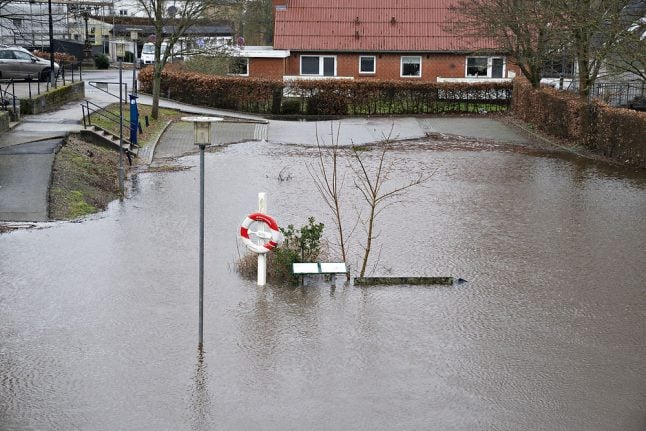 Sunday saw heavy rain and harsh winds with a number of areas flooded. Although the most severe weather had subsided by Monday morning, elevated water levels still present a risk.

The area around the Limfjord waterway is expected to be most susceptible to the flooding.

“More and more water is being pumped into the fjord [by high winds, ed.].  The water level around Lemvig will not peak until this afternoon and it will reach 140 centimetres above normal,” Larsen told the newspaper.

Normal water levels are unlikely to return to the area until Tuesday night, he added.

West Jutland will, however, not be alone in experiencing high water, according to the meteorologist.

The Kattegat sea coast will see water levels rise by about 50-80 centimetres, which may impact harbours with very low quaysides such Sletten Harbour at Humlebæk, according to the report.

Despite high water in some areas, this week’s weather will generally not be “as bad as last Monday,” Larsen noted.

But stormy weather on Sunday has already left its mark as the new week begins.

“Large amounts of rainfall mean that canal systems in both Vejle and Kolding have burst their banks, which has resulted in water in the streets. The parking facilities at Billund Airport have also been under water,” Jarl Vagn Hansen, director with regional emergency services, told Ritzau.

The high water is a result of Sunday's southwesterly gales. The strong winds will still be present on Monday but below the strength of Sunday’s gusts.

Windy weather is forecast to continue throughout the week.