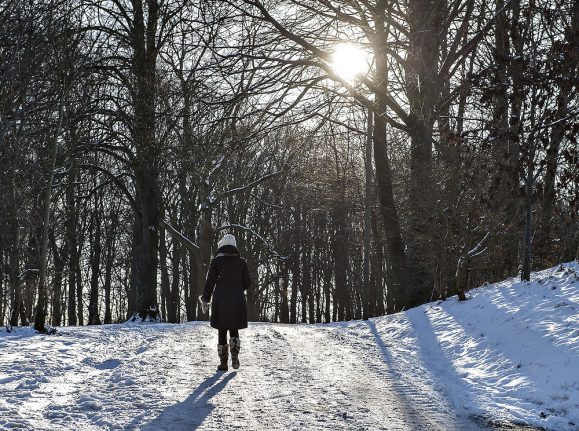 How likely is this scene from Denmark in January 2016 to be repeated this year? Photo: Henning Bagger/Ritzau Scanpix

January has so-far had a less-than-wintry feel, with no snow or frost temperatures moving above 10 degrees Celsius in Jutland on Wednesday morning.

Although a slight dip with possible frost has been forecast for the coming weekend, the freezing cold generally associated with Danish winters remains somewhere over the horizon.

No forecasts predict temperatures dropping under 0°C within the next 10 days, TV2 reports.

That is due primarily to westerly fronts bringing warmer air and rain from the Atlantic Ocean and North Sea, according to the weather report.

The prognosis for mild weather through the rest of January is supported by national meteorology agency DMI.

On DMI’s website, meteorologist Mette Tilgaard Zhang writes that next week will see “a primarily westerly flow of mild air with fronts passing over from the west”.

Daytime temperatures are forecast at between 3-8°C, with 2-6°C at night.

Although there is some potential for colder air and “some white in the precipitation” depending on wind conditions, any snow will “not be nationwide and won’t settle for long,” Zhang writes.

The following week – January 20th-26th – is expected to continue the mild pattern, with rain, wind and clouds, and temperatures at 3-8°C and “a little colder at night”.

The last week of 2020’s first month, which goes into February, is still uncertain according to DMI’s monthly prognosis. But the meteorology agency states that “most prognoses lean towards the weather type from (preceding) weeks retaining their grip on the country and continuing”.

February – according to the calendar, the last month of winter – has the “highest chance of ending cold and wintry”, DMI long-term meteorologist SteenHermansen writes.

But according to the long-term forecast issued by DMI in December, even February’s weather currently looks “more likely to finish above average in terms of both temperature and rainfall”, with few signs to suggest major changes from January.

“This is based on average weather patterns over several weeks however, and it would be rather surprising if we don’t get a portion of snow and cold at some point,” the agency adds.

“All signs therefore suggest that we will continue to receive air from the maritime western corner, which is most often mild, humid and unstable, with wintry intervals only lasting for short intervals,” Hermansen concludes.

READ ALSO: Half a million Danish buildings are susceptible to flooding