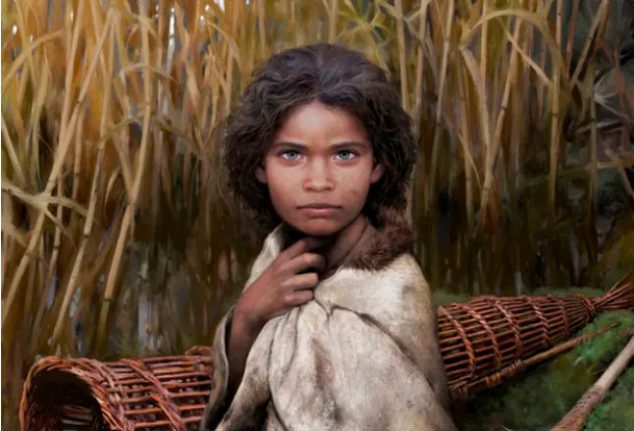 An artist's impression of how 'Lola' would have looked. Photo: Tom Bjorklund
'Lola', as the young woman has been named, was a hunter gatherer who roamed around the Danish island of Lolland about 5,600 years ago,  according to an article published in Nature Communications on Tuesday.
“This is the first genome that has been generated from the Stone Age in Denmark,” Theis ZT Jensen, a post-doctoral researcher at the University of Copenhagen, told The Local.
But as genes for dark skin and dark hair have already been found in previous analyses of neolithic DNA collected in the UK and Spain, Lola's pigmentation did not come as a surprise.
“It was quite common at this point to have dark skin and dark hair. People from the Stone Age had this phenotypic trait,” Jensen explained. “There might be some people that call it 'fake news', but  there will always be people that don't believe in Science.”
The gum was discovered in 2015 at Syltholm on Lolland as part of the dig carried out ahead of construction work on the Fehmarn tunnel to Germany. Jensen, who worked on the dig for two and a half years, was chosen to extract and analyse any DNA from it as part of the research for his now-completed PHD.
He said there were rival theories as to why people in the early neolithic chewed birch gum.
“There are different scenarios: most often they have teeth imprints and most often those are from children or juveniles, which is quite interesting,” he said.
“Birch in itself is mildly antiseptic, so it could be that it's a kind of toothbrush.  It's also a byproduct of extracting the pitch from birch bark, which was used as a universal glue in the Stone Age.”
Jensen said another interesting finding was that although the DNA has been dated to about 300 years after farming was introduced in Denmark, the girl appears to have been a hunter-gatherer, lacking the gene required to break down lactose, the sugar found in milk.
“It seems that there were at least pockets of hunter gatherers still living in Denmark in competition with or perhaps in some kind of synergy with the farmers,” he said.
Along with the human DNA, the team found genetic material from bacteria and viruses, which is nearly impossible to extract from bones and teeth.
“It's quite astonishing that we get a snapshot of a single day, of the disease state on this individual,” he said.
Lola's mouth contained an apparently less virulent version of pneumonia, which perhaps indicates that the bacteria had yet to evolve into the killer infection we know today.
“The bacteria and viruses we captured are 'commensals', which means that basically everyone has them, and we found Streptococcus Pneumoniae in quite high abundance,” he said. “So that ancient bug evolved over time to become quite pathogenic.”
In February last year, researchers from London's Natural History Museum published an image of how they believed Cheddar Man, Britain's oldest complete skeleton, would have looked, basing it on what was then the first full genome analysis of a prehistoric Briton.
The image, which showed him having dark skin and dark hair, caused a sensation, particularly after it was the subject of a television documentary.