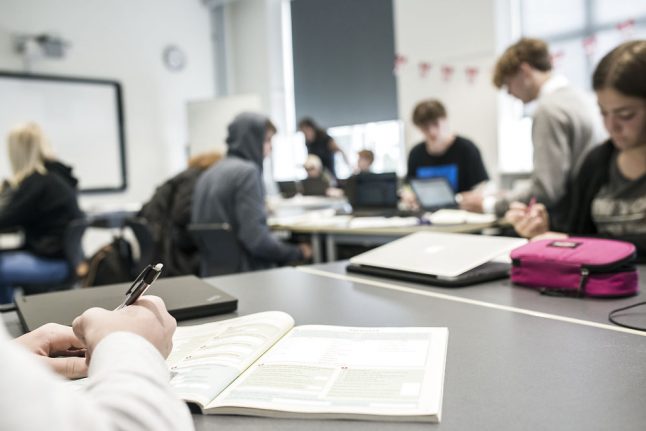 In Tuesday's release of the global 2018 Pisa education ranking, Danish schools ranked higher than the average for OECD countries in mathematics and reading, as was the case in 2015.

The ranking, released once every three years, tests the performances of 15-year-old schoolgoers. In Denmark, 7,657 students at 344 schools took part in the study.

Pisa, the OECD's programme for international student assessment, measures 15-year-olds’ ability to use their reading, mathematics and science knowledge and skills to meet real-life challenges.

Although Denmark also had an above-average ranking for scientific subjects, its performance here was relatively weak, compared to other subjects.

The average performance in science of 15-year-olds is 493 points, compared to an average of 489 points in OECD countries, the report states.

Girls perform better than boys with a non-statistically significant difference of 2 points (the OECD average is 2 points higher for girls).

For reading and mathematics, Danish students’ development has remained stable, although boys did slightly worse in mathematics compared to 2015, while girls fared a little better.

In reading performance, 15-year-olds in Denmark score 501 points compared to an average of 487 points in OECD countries. Girls perform better than boys with a statistically significant difference of 29 points.

On average, 15-year-olds score 509 points in mathematics compared to an average of 489 points in OECD countries. Boys perform better than girls with a non-statistically significant difference of 4 points (OECD average: 5 points higher for boys).

“It’s a good thing that Danish school children, now for the second year in a row, are above the OECD average in all three disciplines,” senior researcher and project leader for Pisa in Denmark Vive Vibeke Tornhøj Christensen told Ritzau in a written comment.

“But the regression in science gives natural cause to look at how scientific subjects are best managed Danish classrooms,” Christensen added.

The report also notes, meanwhile, that the performance of low-performing students in mathematics in particular was one of Denmark’s weakest points, for both boys and girls (rank 70/77) .

Although he average class-size of 15 year-olds is comparatively small, a small proportion of students reported always feeling sad in Denmark, compared to other Pisa-participating countries and economies (rank 70/72), according to the report. But the index of sense of belonging was one of the highest (rank 8/75).

So who performed the best globally?

In reading, 15-year-olds in non-OECD member China's provinces Beijing, Shanghai, Jiangsu and Zhejiang received a mean score of 555 in reading, followed by Singapore (549) and Macao (525).

Of the Nordic countries, Finland scored the highest in reading (520) and science (522), and Denmark clinched the top spot in mathematics (509).

Norwegian students achieved 499 points in reading, 490 points in science, and 501 points in mathematics.

Their Swedish peers meanwhile received a score of 506 in reading, 499 in science and 502 in mathematics.

The OECD average was 487 in reading, and 489 in mathematics and science.