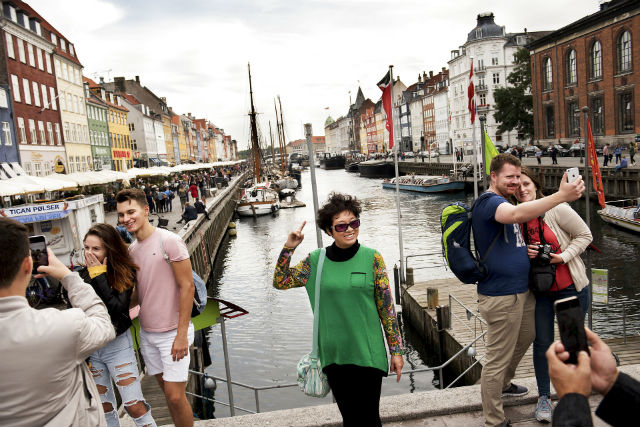 Tourists take pictures in front of Nyhavn. Photo: Linda Kastrup / Ritzau Scanpix
Tourism researchers Jane Widtfeldt Meged and Anne-Mette Hjalager have both accused the agency of failing to take action as the city centre has become increasingly clogged up with foreign sightseers.
“We have had 'overtourism' in Copenhagen for many years and it's a growing problem but it hasn't been discussed,” Widtfeldt Meged, a lecturer at Roskilde University, told the Jyllands-Posten newspaper.
“It's a little as if they're all ducking responsibility,” agreed Hjalager, a professor at the University of Southern Denmark. “The city government has the right, the means and the duty to do something about it and it should step in more.”
Tourism has been booming in Copenhagen, with the number of visitors leaping by 74 percent between 2008 and 2018. The city had 8.8m guests in 2018, and that doesn't even include the 1.9m who used the flat-sharing app AirBnB.
Wonderful Copenhagen expects that number to double to 16m by 2030.
A full 87 percent of those are expected to visit the city's historic city centre, with the main draw the famous Nyhavn with its colourful 17th-century merchant houses.
According to Widtfeldt Meged, Wonderful Copenhagen's plans to take the pressure of Nyhavn by marketing trendy and edgy districts such Nørrebro and Amager are “too little, too late”.
Instead, she argues, Copenhagen authorities should impose limits on how many giant cruise ships can dock in the city.
Copenhageners have up until now remained relatively well disposed to their guests, with 67 percent claiming not to have a problem with the level of tourism and 73 percent saying that tourism has a positive impact on the local economy. Only 38 percent, however, said that their own district had the capacity to take more tourists.
Claus Bødker, the head of Wonderful Copenhagen's cruise ship division, said that the agency was working to reduce spikes in visits.
“We are working determinedly to create a greater spread of visits, both geographically and by season,” he wrote in a written commentary to Jyllands-Posten.
Franciska Rosenkilde, the city councillor in charge of culture and leisure, said that she did not support increased regulation.
“I am generally against communities trying to close themselves in, so that's not something I'm going to work for.”