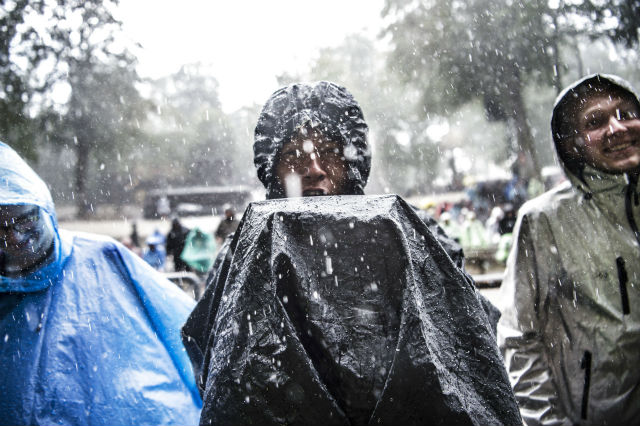 Rain hammering down on the audience for the US singer Larkin Poe at the Smukfest music festival in Skanderborg. Photo: Helle Arensbak / Ritzau Scanpix
Only the island of Bornholm, far to the southeast, is safe.
The Danish Meteorological Institute currently has a Class One weather warning issued for the entire northern coast of Jutland, with up to 35mm of rain predicted to fall over six hours, as well as sporadic 'cloudbursts' bringing of up to 15mm in 30 minutes or less.
“Cloudbursts are a kind of weather jack-in-a-box,” DMI emergency manager, meteorologist Knud-Jacob Simonsen, said in a press release. “They can emerge out of the blue, deliver a month's rainfall of one hour and then disappear as quickly as they came.”
The institute said the extreme rain was bring created over the country by a low pressure front moving westwards over the Skagerrak Sea and northern Jutland towards Zealand and Sweden.
“The low pressure will bring many showers that could be powerful and bring hail and thunder,” it said. The front is expected to hit Copenhagen towards the end of Thursday.
Parts of Denmark have already been hit by cloudbursts, with Vejle, a city in southeast Jutland, receiving 20mm of rain in just 10 minutes on Wednesday, swamping campsites and much of the city.
In Egtved, 17.8mm fell in 10m, and cloudbursts have also been reported in Fredericia, Randers, Aars and central Vendsyssel. Gilleleje was the only town on the capital island of Zealand to be hit on Wednesday, with 16mm hitting in ten minutes.