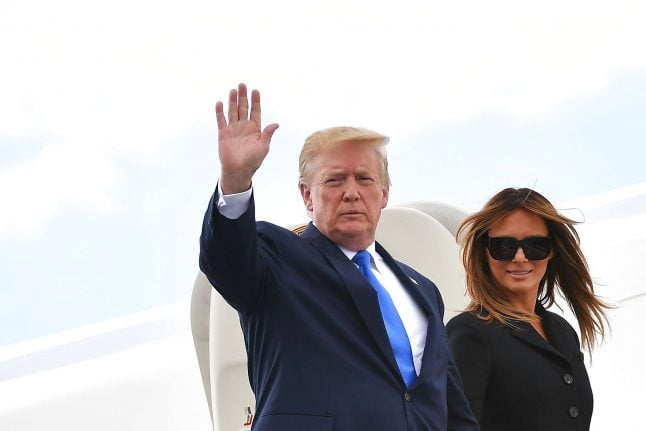 US President Donald Trump and First Lady Melania Trump arrive in Normandy, France, in June. Photo: Mandel Ngan / AFP / Ritzau Scanpix
“Following the invitation of Her Majesty the Queen, the US President His Excellency Donald J. Trump and first lady Melania Trump will make a state visit to Denmark on the 2nd and 3rd of September,” the court announced on Wednesday evening, confirming rumours.
The visit will include meetings with Queen Margrethe II, Prime Minister Mette Frederiksen, and the leaders of Greenland and the Faroe Islands.
In a press release issued by the Danish cabinet office on Wednesday evening, Frederiksen said that she aimed to use the visit to push Danish positions on a wide range of topics.
“I look forward to meeting the American president in Denmark, when we will discuss issues of mutual importance and how we can strengthen cooperation between Denmark and the USA over, among other issues, security politics, the Arctic, trade and investment.”

Rumours had been growing in the days leading up to the announcement, generating debate in Denmark on how to welcome Trump, given the hostility his policies and personality provoke among many Danes.
READ ALSO: Donald Trump could visit Denmark this year. How would Denmark welcome him?
In its press release, the Royal Court noted that Trump would be following in the footsteps of Bill Clinton, George Bush, and Barack Obama.
“The visit in September will be the fourth time that a sitting American President has made a visit to Denmark,” it wrote.
Bill Clinton was the first sitting president to visit Denmark when he visited in 1997. George W. Bush visited Denmark 8 years late in 2005. Barack Obama visited Denmark in 2009 as part of the COP15 climate summit in Copenhagen. US President Bill Clinton standing between Denmark's Queen Margrethe II and her late husband Prince Henrik of Denmark in 1997. Photo: Keld Navntoft / Ritzau Scanpix
Carla Sands, the US Ambassador to Denmark, told the Ritzau news agency that the details of the visit would be arranged over the next few weeks.
“In the the coming days, my staff and I will prepare for the President's visit, which will without doubt strengthen the already very strong alliance that exists between our two nations,” she said.

We are excited at the prospect of @POTUS’ State Visit in September, which will undoubtedly strengthen the the very strong alliance between our two nations. ???? @kongehuset @Statsmin #dkpol #AlliedStrong https://t.co/p0NAY5OvxZ