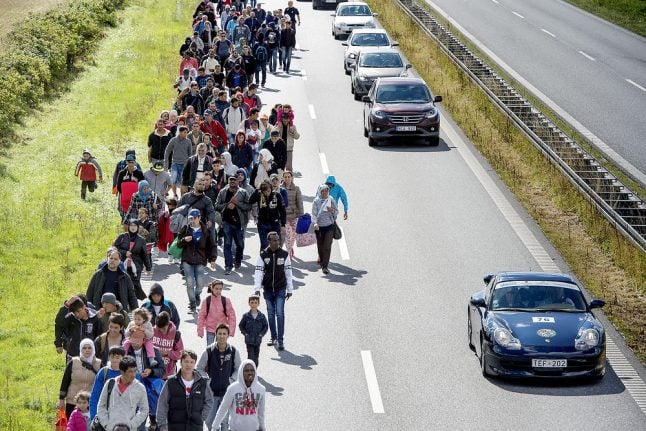 Refugees near Denmark's southern border in 2015. Over 20,000 people sought asylum in Denmark in 2015, but arrivals are now at their lowest since 2008. Photo: Bax Lindhardt / SP / Ritzau Scanpix

The figure represents the lowest number of asylum seekers registering in the country in a quarterly period since 2008.

At the beginning of last year, just under 3,500 people were reported to have applied for asylum in 2017, at the time the lowest figure seen by the country since 2008.

But the issue of asylum seekers – both their treatment and how many should be taken in by the country – remains a hot-button topic for political debate, not least with a general election upcoming on June 5th.

Earlier this year, new legislation was passed by parliament providing for what has become known as a ‘paradigm shift' in Denmark's refugee and asylum policy, so-called because of the shift in aim from integration to future repatriation of refugees.

Denmark has refused to accept quota refugees from the UN since 2016.

A Danish Red Cross report in April found that a large proportion of children accommodated at the Sjælsmark facility showed signs of significant risks to their mental health, ranging from difficulty sleeping to loss of appetite.

Politicians continue to talk about the need to address the issue of asylum as the election approaches.

Far-right fringe party the New Right (Nye Borgerlige) has demanded a complete freeze on Denmark accepting any asylum seekers. That party has been joined as a newcomer in the race to enter parliament by Stram Kurs (Hard Line), a vehemently anti-Islam party whose leader has a criminal conviction for inciting racial hatred, currently under appeal.

The established anti-immigration party, the Danish People’s Party (DF), last week announced it too was calling for Denmark to refuse to take in any refugees at all.

The hardline policy has not previously been propagated by parliamentary parties, and is likely to be in breach of international conventions such as the UN Refugee Convention and the EU’s Dublin Regulation.

“We must have a complete stop to asylum in the new parliamentary term. And it’s not important to me whether the proposal is within or outside of international conventions,” DF’s parliamentary candidate Morten Messerschmidt told Jyllands-Posten on May 10th.

The party’s leader Kristian Thulesen Dahl confirmed the policy, saying that Denmark should “help people in (neighbouring countries) and not by giving them asylum in Denmark”.

“Denmark is part of the international community, so if I am met with a demand for us to leave international conventions and things like that, I cannot honour it, I’m very sorry,” Rasmussen said.

Minister for Immigration and Integration Inger Støjberg, who like Rasmussen represents the Liberal (Venstre) party and is known for her hardline stance and rhetoric on immigration, rejected a unilateral Danish freeze on asylum, saying she wanted to “limit” numbers.

Støjberg, in an interview with Politiken, denied that the topic of asylum was being kept alive to win votes, despite the low numbers of asylum registrations, and appeared to suggest demographic change was on her agenda.

“We want (the election) to be about the things that are important for Denmark, including foreigners. For me, immigration is a definitive area for how Denmark will look in the future,” she told the newspaper.

“With the migration we are seeing to Europe, it is not a question of whether it will change Scandinavia and Denmark, it is a question of how much we will allow ourselves to be changed,” she continued.

Confronted by Politiken with the fact the asylum figures are at their lowest since 2008, the minister said that it was “not just a question of how many people are coming”.

“This is also very much about the people who are here now and how much they accept Danish norms and values and can provide for themselves,” she said.

The low numbers of current asylum seekers were a result of the government’s policies and legislation, and had made the issue “easier to manage”, but the situation could change under a new government, Støjberg claimed in the interview.

Although the opposition Social Democrats, who hope to form a new government after the election, have voted for the majority of the asylum curbs — including the paradigm shift — proposed by the current government, Støjberg said their policy could change, given their reliance on other left-wing parties for parliamentary support.

Social Democrat leader Mette Frederiksen has promised not to change her party’s own strict line on immigration after the election, unless that change is also supported by the Liberal and Danish People’s parties, Politiken writes.