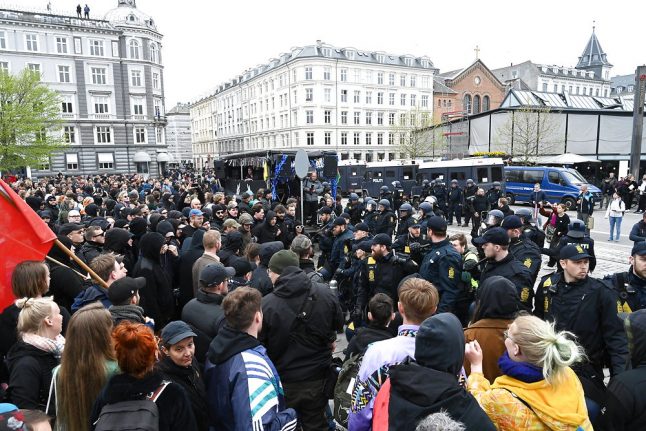 Both the bridge and nearby Søtorvet area were temporarily closed off following a demonstration around 500 metres away at the Israels Plads square, which then moved towards the busy crossing.

Several police officers drew batons, according to photographers at the scene, while there was a “massive” police presence, Copenhagen Police tweeted. Police confirmed at 4:30pm on Wednesday that eight arrests had been made in connection with the unrest.

“Not all of the arrests were made at Israels Plads. Some were made elsewhere in the city,” the police communications department said.

Five of the arrests were made due to violence against officers, police confirmed in a tweet.

One arrest was made for breaching Denmark's ban on face-masking garments and one for misuse of fireworks. One person has been charged with public order offences, the tweet added.

A large number of people from the ‘Revolutionary Antifascists’ (Revolutionære Antifascister) group, and a smaller counter demonstration organized by the youth wings of the Liberal (Venstre) and Liberal Alliance parties were present at Israels Plads, Ritzau reports. According to tabloid Ekstra Bladet, the situation began to escalate after plainclothes police officers were referred to by a speaker using a megaphone.

Police cut short the demonstration by the anti-fascist group on Queen Louise’s Bridge. Calm had been returned by late afternoon with demonstrators moving towards the Fælledparken park, police said.

READ ALSO: Labour Day: your guide to May 1st in Denmark