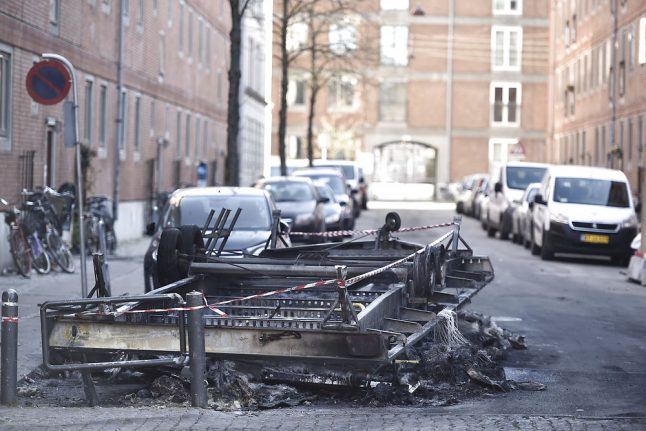 Unrest in the area on Sunday followed a demonstration by Rasmus Paludan, an extremist right-wing agitator whose demonstrations feature burning the Quran in areas with sizeable minority ethnic communities. Paludan has previously received a suspended prison sentence under Denmark's racism laws for making derogatory or degrading remarks about black South Africans in comments published on YouTube.

Paludan’s demonstration on Sunday took place at Blågårds Plads in Inner Nørrebro, a popular part of the multicultural Copenhagen neighbourhood with a large number of nearby bars and restaurants. He was escorted from the area by police before being able to burn Qurans as part of his planned protest, Politiken reported.

People reacting to the demonstration directed some of their anger at police and cobblestones were thrown, Copenhagen Police said. The city’s fire service reported that several small fires had been started, including in cars and waste containers.

“It is a little like a New Year’s Eve when the clock is about to strike twelve. We’ve been busy, but the fires were only small, fortunately,” operation leader Hans Jørgen Larsen told TV2.

Police deputy superintendent Allan Wadsworth-Hansen confirmed early on Monday that calm had been restored to Inner Nørrebro as well as the Outer Nørrebro and Nordvest areas.

“Copenhagen is its normal self at the moment. Things are calm, but we are maintaining a presence on the street,” Wadsworth-Hansen said.

Rasmussen, Poulsen and Østergaard all condemned Paludan while calling for the public not to respond to provocations with violence.