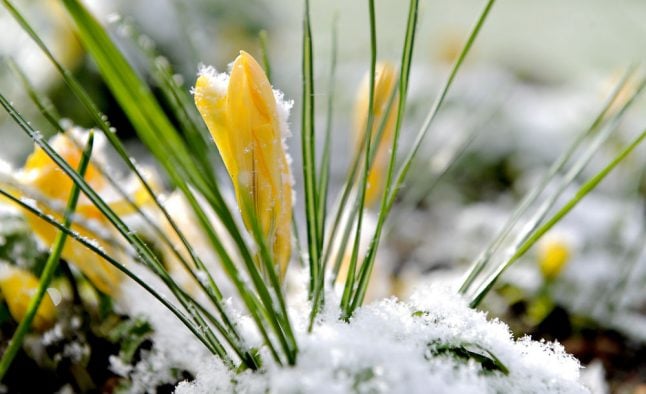 Mild April weather is keeping a low profile for the time being, with cold nights and wet days persisting throughout this weekend, according to forecasts from national meteorological agency DMI.

“This weekend will offer up cold winds and sub-zero temperatures. Friday morning will see showers with snow and sleet here and there,” DMI’s Dan Nilsvall said.

The damp weather will continue throughout the day, particularly in the south, although there may be some intermittent sunshine.

Temperatures are under freezing point this morning, with Jutland seeing the worst of the chill with as low as -5 degrees Celsius measured.

“North Jutland will have sun at the start of the day, but it is also here that it will be coldest. During the day, we expect temperatures to come up and reached between 5 and 7 degrees (Celsius),” Nilsvall said.

Winds will be mild to moderate, with stronger gusts locally in coastal areas.

“There is a cold front being pulled down over the country, making it feel cold. Friday and Saturday will feel particularly cold,” Nilsvall said.

Night-time temperature on Friday is forecast to range between -2°C and 3°C.

Motorists, particularly in areas with snowfall, should be wary of icy roads, the DMI meteorologist said.

“My advice would be to drive carefully during night and morning hours, but it will get better when the sun comes up,” Nilsvall said.

The cold weather will continue Saturday, with isolated showers, mostly in the south, and temperatures between 5 and 9 degrees Celsius.

“We’ll see the sun at the start of the day, but it will be cloudy again later. In the south, there may be showers with rain or hail,” Nilsvall said.

On Sunday, the weather is expected to improve slightly, with a good chance of sun and clear weather.

North Jutland will see the most sun, but the south will again be subjected to snow, hail and rain. The snow could settle in some areas, with up to a few centimetres staying on the ground throughout the night.

Those despondent about the sudden disappearance of spring can take some comfort in DMI’s forecast for next week, which currently shows warmer daytime temperatures reaching into the teens from Thursday onwards.