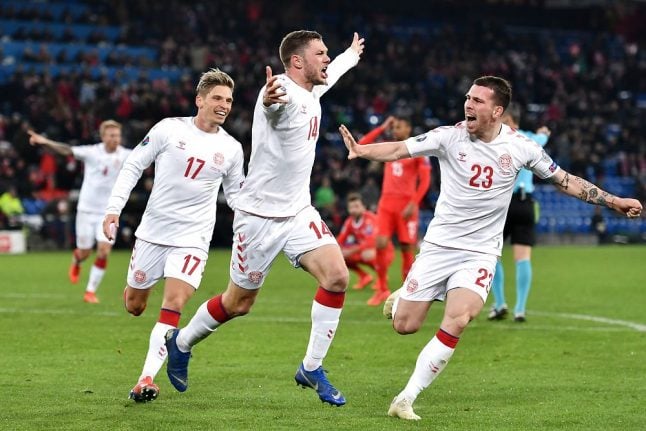 But the red and whites pulled off an astonishing comeback, scoring three goals in the game’s last ten minutes to draw 3-3.

Trailing 3-0 to the hosts with only six minutes of the match remaining, Denmark clawed the score back to 3-2 with goals from Mathias ‘Zanka’ Jørgensen after 84 minutes and substitute Christian Gytkjær on 88 minutes.

Right-back Henrik Dalsgaard became the hero of the moment as he scored his first goal for his country, three minutes of added time after the regulation 90 minutes, completing a memorable turnaround for the Danes from 0-3 to 3-3.

“When they made it 3-0, I thought it was over. But we kept going,” Dalsgaard told Kanal 5.

Danish talisman Christian Eriksen, who provided the assist for Jørgensen’s goal, said he had “never been involved in anything like” the final minutes of the match.

“When we scored the second goal, we felt we’d get the third. It was there, the feeling was there,” the Tottenham Hotspur playmaker said.

“After we scored the third, we thought ‘shall we also go for a fourth?’ But no, we needed to use our heads, because there wasn’t long to go. In the end it was satisfying to get a point,” he added.

Switzerland, who are one of the four finalists in this year’s inaugural UEFA Nations League tournament, are considered the strongest opponent in Denmark’s qualifying group for the 2020 Euros, which also contains the Republic of Ireland, Georgia and Gibraltar.

As such, a draw in Basel is a positive result for Denmark with the rest of the qualifying fixtures still to come.

“I feel like we could beat anyone. Even on a very bad day, we drew 3-3 away to Switzerland. We need more quality in future, but in terms of points it’s a good start,” Dalsgaard said.

“We have gained a belief that we’ll be okay, whoever we are playing. That belief is built up over time,” Hareide told Kanal 5.

“We knew something could happen with the Swiss team if we got the score back to 1-3, and when that goal came, we threw ourselves at them. It was superbly done,” he added.