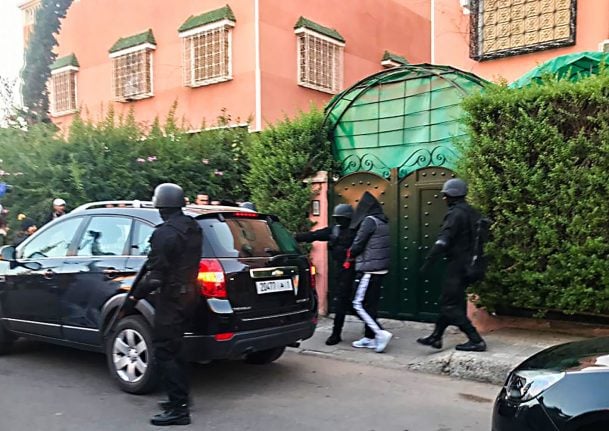 Members of the Moroccan Central Bureau of Judicial Investigation arrest one of the suspects of the murder of two Scandinavian hikers, December 20, 2018. Photo: AFP.

The arrests were made in several cities in the kingdom, bringing number of people detained over the double-murder to 18, said Abdelhak Khiam, head of Morocco's central office for judicial investigation.

“The two victims were stabbed, had their throats slit and were then beheaded,” he told AFP.

The four main suspects in what the authorities describe as a terrorist act were arrested between Monday and Thursday last week in the tourist hub city of Marrakesh.

Investigators said on Monday that the dismantled “cell” was made up of 18 members, including three with terror-related criminal records.

“The emir of the group” was Abdessamad Ejjoud, a 25-year-old street vendor living on the outskirts of Marrakesh, said Khiam.

Ejjoud had “formed a kind of cell that discussed how to carry out a terrorist act inside the kingdom,” he told AFP.

He was said to be in a video shot a week before the murders, in which four suspects are seen pledging allegiance to Islamic State group leader Abu Bakr al-Baghdadi with a black IS flag in the background.

The alleged killers had “agreed under the influence of their emir to carry out a terrorist act… targeting the security services or foreign tourists,” Khiam told AFP.

Two days before the murders, they allegedly went to the Imlil region “because it is frequented by foreigners” and “targeted the two tourists in a deserted area”, he added.

The others suspected of direct involvement in the killings were Abderrahim Khayali, a 33-year-old plumber, 27-year-old carpenter Younes Ouaziyad, and Rachid Afatti, a 33-year-old street vendor.

“The members of this cell had no contact with Daesh (IS) operatives in conflict zones, whether in Syria, Iraq or Libya” despite declaring allegiance to Baghdadi, he added.

Rabat's prosecutor has also said the four main suspects pledged allegiance to the Islamic State group in a video filmed a week before the double-murder.

The killings have shaken Norway, Denmark and Morocco. Another video circulated on social networks allegedly showed the murder of one of the tourists.

Since 2002, Morocco had dismantled 185 terror cells and taken measures to rehabilitate those arrested, said Khiam.

“The origins of this extremism must be fought — namely insecurity, illiteracy and ignorance,” he said.

Tourism is a cornerstone of Morocco's economy and the kingdom's second-largest employer, after agriculture.The sector accounts for 10 percent of national income and is one of the country's main sources of foreign currency.