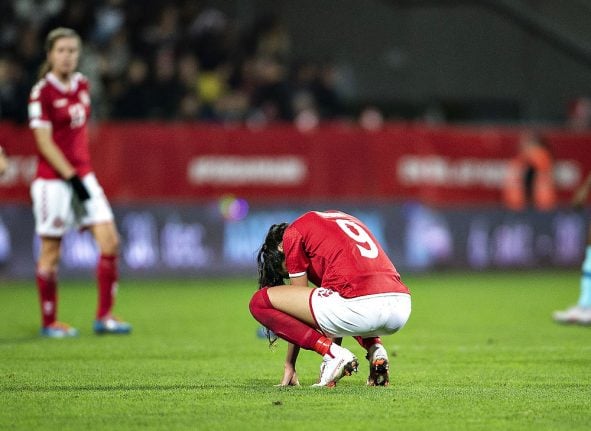 The Danish side took an early lead through a Nadia Nadim penalty on five minutes, but failed to convert any further chances during the match.

Lineth Beerensteyn equalised for the Dutch shortly after Nadim’s goal and rubbed salt into the wounds of the Danish fans with an injury-time winner as the visitors triumphed 2-1 on the night.

Already 2-0 down from the first leg of the tie, Denmark finished with an aggregate 4-1 defeat, meaning they fail to qualify for a play-off final and chance to reach next year’s showpiece tournament.

“It’s really sad and such a shame. We created a lot of chances but didn’t manage to score them. It hurts,” Nadim said after the match.

“I don’t think I’ll get much sleep tonight,” the Manchester City striker added.

The Dutch equaliser, which came in the seventh minute, was a hammer blow for Denmark’s chances, Nadim, who scored against the same opposition in the final of the 2017 European Championships, said.

“Suddenly we needed three goals, so everything became a lot harder. We had chances in the second half, but we weren’t good enough,” she said.

The defeat means that Denmark will not play another competitive fixture until the autumn of 2019.