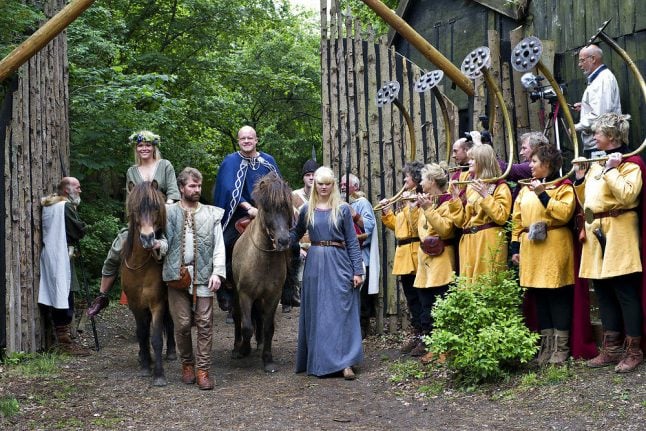 A file photo of a Viking-style wedding. But are the colours accurate? Photo: Jens Nørgaard Larsen/Ritzau Scanpix

Green is the colour of hope, white symbolises surrender or innocence, and black binds the living to the dead.

Colour has always carried meaning for people, including the Vikings, for whom it symbolised power and wealth.

But what colours did the Vikings use?

Archaeologists and chemists have now studied colour use in the Viking Age based on the chemical analyses of pigments from a number of objects and a review of existing information on the topic, ScienceNordic reports.

These colours are now available to all in the form of a colour palette: A Viking paint chart.

Explore the colours in the interactive image below to learn how they were made, where they came from, and what they symbolised.

Twelve colours thought to be common in the Viking Age, according to a new report into Viking pigments. Click or hover your mouse on each colour to learn more. Photo: National Museum of Denmark / Roberto Fortuna

The Viking Age was probably far more colourful than you might think, says conservator Line Bregnhøi from the National Museum of Denmark, and co-author on the new report.

“When we’ve previously excavated finds from the Viking Age among others, we weren’t so interested in colours. Partly because we didn’t have the techniques to study pigments, but also because we assumed that the colours appeared more or less as they were found,” says Bregnhøi, speaking to ScienceNordic.

Bregnhøi and her colleague Lars Holten have used the advanced techniques now available to create the colour palette used in the reconstruction of the largest Viking building discovered in Denmark.

The Royal Hall, as the building is called, was reconstructed at the Centre for Historical-Archaeological Research and Communication in Denmark (as also known as Sagnlandet Lejre). It uses the same type of paint used by upper class Vikings.

READ MORE from ScienceNordic: What colour did the Vikings paint their houses?

However, the archaeologists behind the report warn of some caveats: There are still few finds from the Viking Age, and there remains little to no pigment on those that do exist. Pigments could have been removed during excavations or by decay after hundreds of years of burial.

It is not certain that the researchers have got the colours exactly right, but the analyses are the closest we can come to recreating Viking colours with existing technology.

Archaeologist Henriette Syrach Lyngstrøm from the Saxo Institute at the University of Copenhagen, describes the report as one of the most essential studies we have on the Viking’s use of colour. Lyngstrøm was not involved in the new report.

“It’s an important study because it presents the chemical analyses that form the basis for the very subjective ideas that archaeologists have on Viking Age colour,” she says.

“On the rare occasion that we excavate a piece of painted wood, the colour looks nothing like the original. Here, chemists and conservators analyse the pigments and help us to further our interpretations,” says Lyngstrøm.

Even though the evidence of how Vikings used colour is sparse, archaeologists are fairly sure they have nailed down some key points.

They know that Viking’s used bold colours to be seen. They also know that Vikings used colour pigments from numerous sources, such as ochre and charcoal, which they blended together along with a binding agent so that the colour adhered to the material. Common binding agents used by the Vikings were milk products, egg, or linseed oil.

The Royal Hall at Sagnlandet Lejre in Denmark was painted with linseed oil paint, since it is the most durable binding agent used by the Vikings. Moreover, the hall was not entirely covered in paint, as the Vikings are unlikely to have used expensive paint over the entire building.

READ MORE from ScienceNordic: How are we affected by colours?

It is not insignificant which colours the Vikings used on their houses. For example, some colours were rarer than others and were costly having been imported over long distances, says archaeologist Lars Holten, director of Sagnlandet Lejre and co-author on the new report.

“We know that the symbolism of colour is enormously important in all cultures. Red, white, and black are some of the most common and have similar symbolism among numerous cultures,” says Holten.

One of the more expensive colours is the red ‘cinnabar’ (number 5 on the interactive chart above), and it was likely used by chieftains or princes as a status symbol to demonstrate power over their surroundings, says Holten.

Red symbolises strength or danger, probably because blood can be associated with both the bringing of life and injury.