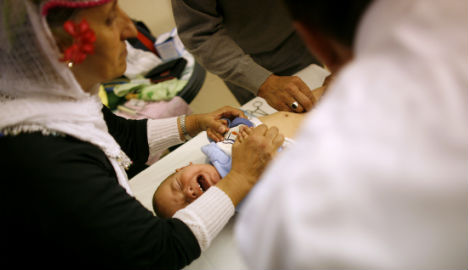 A Muslim boy is circumcised in Bulgaria. Photo: STOYAN NENOV/Ritzau Scanpix
“It has been difficult today, and if we had taken the easy route, we would have said ‘yes’ to a ban,” the party’s group chairman, Søren Gade, told the Berlingske newspaper after a long-drawn out meeting of party MPs to discuss the issue on Tuesday.
Jakob Ellemann-Jensen, the party’s political spokesman, told the paper that views had been split across the party.
“Many have veered both for and against. There are really a lot of arguments both for and against, and many among us held  different views.”
The citizen's proposal for the ban had received 44,685 votes at the time of writing, bringing it within a whisker of the 50,000 it needs to force a vote in the Danish parliament.
The proposal was made by Lena Nyhus, chairwoman of Intact Denmark, an anti-circumcision pressure group.
“If people want to let themselves be circumcised then they should have the opportunity to make that choice as an adult. Otherwise, they ought to be allowed to grow up with their body intact,” Nyhus said when she launched the petition in January.
Opinion polls in the past have found that close to three quarters of Danes support a ban on the circumcision of boys and the Danish Medical Association has also called for it to be illegal under the age of 18.
But the proposal has caused great disquiet among Jews and Muslims in Denmark with Mosaiske, which represents Jews in Denmark this month warning in a fact sheet that the proposal “threatens the right of religious minorities to exist on a par with their fellow citizens”.
The opposition Social Democrats and the populist Danish People's Party have both come out in opposition to the ban. The Liberal Alliance and the Conservative party plan to give their MPs a free vote. The Socialist People’s Party (SF) is the only party which is requiring its MPs to vote in favour.
“We think it’s very simple,” SF health spokesperson Kirsten Normann Andersen said earlier this month. “We had no problems deciding to forbid female circumcision, we had no problem scrapping the right for parents to smack children, and now it’s time to get to grips with this issue.”