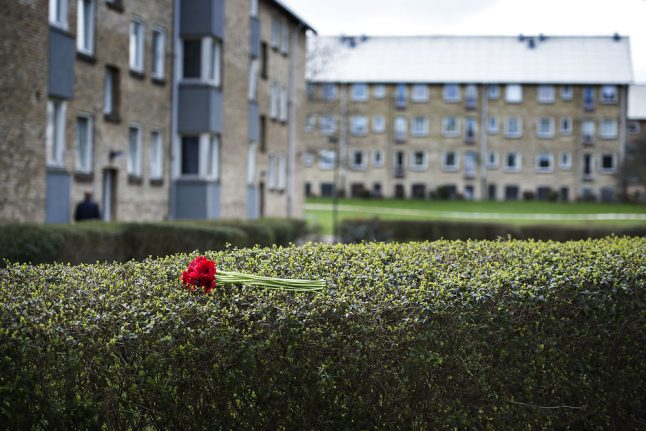 A flower left on a hedge outside the apartment block where the murders took place on April 11th last year. Photo: Ida Guldbæk Arentsen/Ritzau Scanpix

The jury reached its decision in the case on Wednesday, reports news agency Ritzau.

A sentence will be given in May following a statement by the Danish Medical Legal Council (Retslægerådet) in regard to the man's psychiatric state, the agency writes.

He admitted the crimes at a preliminary hearing shortly after his arrest last year and again at the start of his trial in February.

The man, who is of Afghan heritage, said that the killings were the culmination of a long-running conflict with his wife.

“We fought all the time. She had promised my daughter to a man in Afghanistan. I didn't want that,” he said according to Ritzau's report.

“I lost control of myself that morning. I was not myself, I was driven to insanity after everything she said to me,” he said in court.

The murders took place on April 11th last year at the family's home in the Brønshøj neighbourhood near Copenhagen. Three children and their mother all lost their lives.

The mother, who was 36, was shot twice with a pistol, while the children, aged 13, 15 and three, all suffered several knife wounds, Ritzau writes.

Police found the man inside the apartment on arrival at the crime scene.

According to a mental examination, the 39-year-old was not insane at the time of the crime, but has since developed psychotic symptoms, prosecutor Stine Winther said on the first day of the trial.

That point may influence the sentence given to the man.

“I am not going to argue whether my client is guilty. The question is whether he was guilty when he [committed the murders],” defence lawyer Asser Gregersen told the court at the end of February.