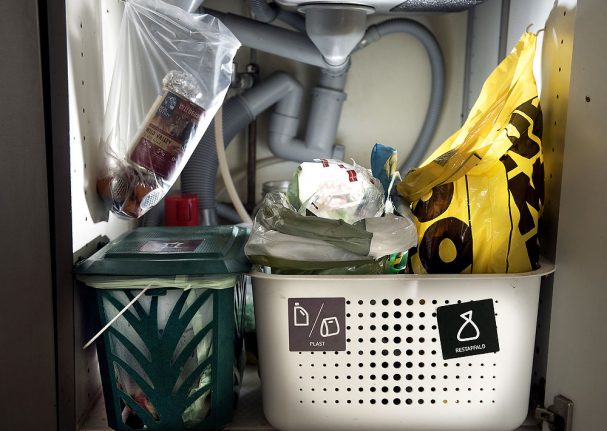 Sortation of waste in a Danish household, including a green 'bio bin'. Photo: Liselotte Sabroe/Scanpix Denmark

31 of the 98 municipalities in the Scandinavian country collected bio waste at the end of last year, according to information released by the Danish Environmental Protection Agency (Miljøstyrelsen).

One of the newcomers to that list was Copenhagen Municipality, which distributed hundreds of thousands of green bio waste baskets to its residents.

“Great credit to municipalities for giving residents the option of recycling their food waste. There is no doubt that recycling must be increased in future,” environment minister Esben Lunde Larsen wrote in a press statement.

Collected biodegradable waste will be used to produce biogas, which will help supply electricity and heating, reports news agency Ritzau.

Some of the food waste will also be converted to fertiliser.

In Copenhagen, collection of this type of waste has been carried out in housing areas for some time, and was made mandatory for apartment buildings in 2017.

Last year, 300,000 waste baskets were distributed by the city's municipality and up to 15,000 containers installed in back yards.

“People have generally accepted it positively. We have had a lot more positive responses than negative ones.

“Most people actually think it's really good and makes sense to collect their refuse,” said Lotte Stächer, who heads the Byens Drift waste collection service, which is attached to Copenhagen Municipality.

Stächer said that an effort had been made to distribute information to ensure that the change in procedure went as smoothly as possible.

“We used a lot of energy on [information]. But we also think we owe that to residents, given we're making such a significant intervention in their lives,” she said.

“We are bringing out something people have to have in their kitchens. So we ought to explain why,” she said.

Collection of bio waste is likely to become even more commonplace in Denmark and throughout the EU, with an environmental policy within the union making the practice mandatory by 2023.

“The new directives include ambitious but realistic targets and requirements, including separate collection of organic waste from households. Municipalities that have already introduced organic waste sortation now have the advantage of being in the vanguard,” Larsen said.