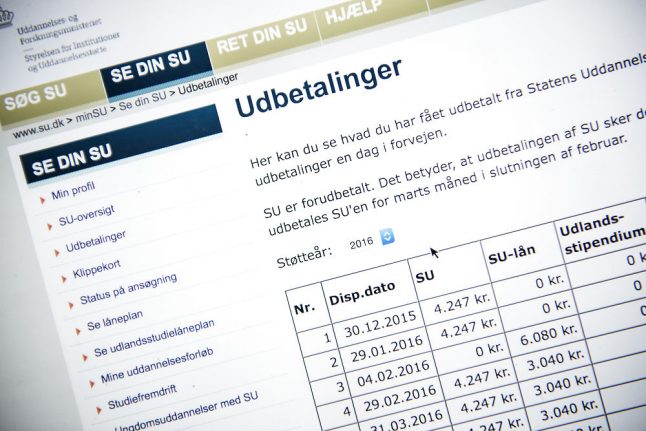 Under EU law, citizens of other member states are entitled to draw the loan while studying in Denmark.

But Denmark is currently unable to force repayments of invoices sent to individuals once they have returned to their home countries.

“It is beyond all doubt that it is unacceptable that some people come to Denmark, receive SU and loans funded by the Danish state and then just go back to another EU country and don’t bother paying the money back,” minister for tax Karsten Lauritzen told Politiken.

Lauritzen and Minister for Education and Research Søren Pind have asked the EU Commission for help with the issue – a request that received a lukewarm response, according to Politiken’s report which is based on a letter sent by the commission in response to the ministers.

The EU does not, for example, specify whether debt collection of SU loans can be considered a civil law issue. This is relevant for Denmark’s ability to file a civil lawsuit under the Brussels Regime, a set of rules regulating which courts have jurisdiction in civil or commercial legal disputes between individuals resident in different member states.

That would enable a ruling on a demand for payment made in Copenhagen could be taken to a court in, for example, Madrid, which, in theory, could then enforce repayment.

But if SU loans are not civil law issues, Denmark must recourse to other options, according to professor Henning Bang Fuglsang Madsen of the University of Southern Denmark’s Department of Law, who spoke to Politiken over the issue.

Should civil law not be applicable, Denmark would be required to request the EU pass new rules specific to SU loans, or to wait for an update to the Brussels Regime in 2022, Madsen said.

The EU court could make a decision on whether the Brussels Regime can help Denmark in the current situation, if Denmark was to take a matter to the court now. But that process would be “very complicated and very, very cost-heavy,” Madsen told Politiken.

Lauritzen told the newspaper that he planned to contact individual countries that send high numbers of students to Denmark over the issue, and hopes that the EU will eventually provide assistance.

“When we are speaking about people that have taken a high-level education programme, it is rare that they will end up in an EU country with no values. And their debt will be subject to interest in Denmark, and they are going to pay, it’s just a question of when,” the minister said.