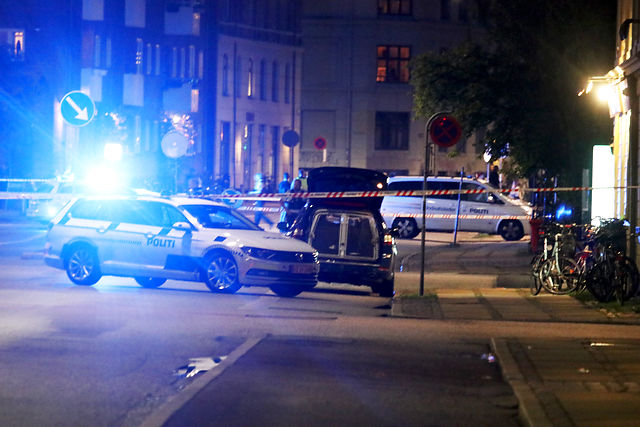 Police respond to a reported shooting in Nørrebro on July 15th. Photo: Mathias Øgendal/Scanpix
Copenhagen Police and East Jutland Police established a number of ‘stop-and-search’ ordinances in large areas in the capital and Aarhus in response to a series of shooting and stabbing incidents thought to be tied to gangs.
The ordinances (called visitationszoner in Danish) allow police to stop anyone within a predetermined area and search them for weapons without having probable cause.
Copenhagen Police established a new stop-and-search zone last week that covered areas of Nørrebro, Husum, Brønshøj and Bispebjerg.
According to information provided to broadcaster DR, police have searched 143 individuals within the zone since last Thursday but found no weapons. The only result of the ordinance thus far has been five citations for drugs.
On June 25th, East Jutland Police established a large ‘stop-and-search zone’ in western Aarhus in response to increased gang activity associated with the group Loyal to Familia’s expansion from Copenhagen to Denmark’s second-largest city.
Since then, officers have conducted 305 searches but have turned up just three knives and two blunt instruments. Only one person faces charges.
Despite not turning up a single gun in the 448 stops across the two cities, police in both Copenhagen and Aarhus characterised their efforts as successful.
“We are satisfied with the effort and we will continue undaunted throughout the period of the stop-and-search ordinance. I obviously hope that the criminality will fall. It is naive to believe that it can be completely removed but that is of course the goals,” Copenhagen Police Vice Inspector Henrik Møller Jakobsen told DR.
In Aarhus, East Jutland Police Inspector Lau Thygesen said that “it is positive that despite everything we have found so few weapons”.
“We see it as a sign that the gang members have understood our message and are therefore not carrying weapons around,” Thygesen said.