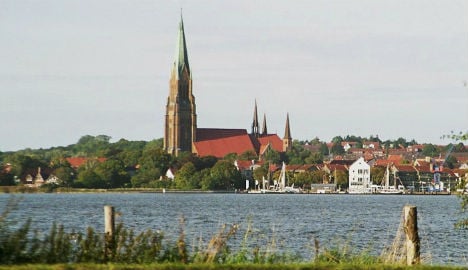 Could St Peter's Cathedral in Schleswig, where King Frederick I of Denmark is entombed, return to Danish hands? Photo: WikiTour/Wikimedia Commons
“We would like a Denmark to the Eider. This is a hope and a dream at the same time,” the party’s deputy chairman Søren Espersen said in a TV interview,  the Nordschleswiger newspaper reported.
In the interview Espersen said his ambition was shared by Danish speakers in the north of Germany.
“This must also be the idea of ​​the Danish minority [in Germany] otherwise I do not understand anything,” he said.
“Of course, I don’t expect a tank war in the border country. I don’t want that.”
As the story was picked up by the German's Die Welt newspaper and DPA newswire, Espersen pulled back, stressed that the comments, made in a TV interview, had only been partially serious.
The story was “nonsense”, he told the Ritzau news agency: “I'm pretty sure you understand the twinkle in my eye.”
In the interview with the DK4 TV channel, Espersen argued that Denmark had missed an opportunity to recover its lost province at the end of the Second World War.
“After 1945, however, we would have been able to get the whole of Schleswig back for Denmark barely lifting a finger,” he said. “The English and the French were ready to do it, because they wanted to smash Germany as much as possible, but we Danes had said 'no' to a border change.”
From the 11th century to the Napoleonic era, the river Eider marked the southern border of Denmark. The river, which cuts across northern Germany from Tønning in the North Sea to Kiel in the Baltic, lies roughly 60km south of where the Danish border now stands.
During the 19th century, the province came under dispute for reasons so complex that British Prime Minister Lord Palmerston is reported to have said that no one really understood them.
“Only three people have ever really understood the Schleswig-Holstein business,” he said.  “The Prince Consort, who is dead, a German professor, who has gone mad, and I, who have forgotten all about it.”
In the Treaty of Versailles which followed the First World War, Germany and Denmark agreed to hold referenda, and in 1920 Central Schleswig voted to become part of Germany, and northern Schleswig part of Denmark.
In his interview, Espersen said he didn’t believe the border was finally settled, even if it might take fifteen generations to see a change.
“Nothing in history is static,” he said. “It would be something entirely new if borders remained unchanged.”
Here is a map of the border as it was in 1864. The blue border line starting at Tønning follows the Eider river.
Denmark's current border cuts across the Jutland peninsular 7km north of Flensburg.
For the Danish speakers amongst you, here's the interview.
Url copied to clipboard!