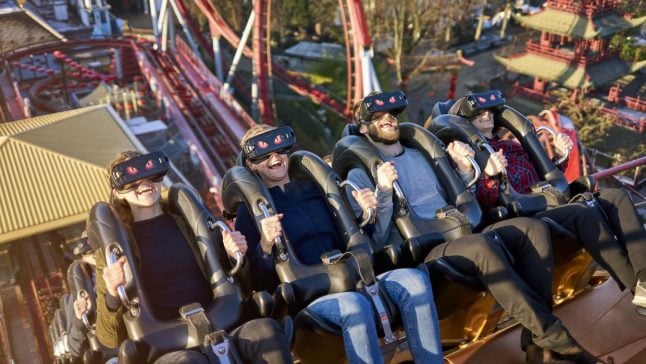 The Demon will become the first virtual reality roller coaster in Scandinavia. Photo: Lasse Salling/Tivoli
The western Copenhagen suburb of Høje Taastrup revealed plans this week for what will be Scandinavia’s largest water park.
“We’re talking about the world’s fifth largest water park. We’re talking about a vacation and amusement village and nature park with all kinds of activities. With hotels and vacation homes. It will be fantastic and it will put Høje Taastrup not only on the Danish map, but on the world map,” the municipality’s mayor, Michael Ziegler, said in a video announcement on Facebook.
In addition to the indoor/outdoor water park, the project, dubbed Nordic Water Universe, will also include a mini golf course, a playground, a number of restaurants and shops and a large conference centre.
Work will begin in October and the water park is due to open in 2020. The rest of the complex will be completed by 2028, and Ziegler said the project will create 3,000 jobs.
“The first and largest [phase] will cost 2.2 billion kroner to build and then the rest will be added as visitor numbers increase,” Ulf Højen of Nordic Corporate Finance, which represents a number of international investors involved in the project, told business daily Børsen.
New water park for Aarhus too
Jutland residents need not be jealous, however. This week also saw the announcement of a new massive water park in the Risskov district of Aarhus. The 12,600 sqm “sport cultural pool” will feature a three-story water park highlighted by a 105-metre long water slide, the second longest in Denmark.
The Risskov project will cost some 230 million kroner. A completion date wasn’t immediately announced.
First virtual reality roller coaster in Scandinavia
For those who prefer to get their kicks fully clothed, the historic Copenhagen amusement park Tivoli also announced a major new attraction for the 2017 season.
The park’s Demon roller coaster will be turned in to an immersive experience through what Tivoli says will be the first virtual reality enhanced roller coaster in Scandinavia.
“Imagine being strapped into a roller coaster going 77 kilometres per hour, exposed to 4G force, passing three loops and experiencing a physical drop of 20 metres. Now this experience will be further enhanced with a universe of fire-breathing dragons and demons from Chinese mythology and fireworks that explode around you in a Chinese universe from a bygone era,” a Tivoli press release stated.
The virtual reality experience will be an optional add-on to the Demon, costing an additional 25 kroner per ride.
“Virtual reality opens up new doors for us to create spectacular experiences – even on our existing rides. Being the first in Denmark, indeed in all of Scandinavia, is the icing on the cake,” Tivoli design director Jacob Helenius said.
Tivoli opens for the season on April 6th.