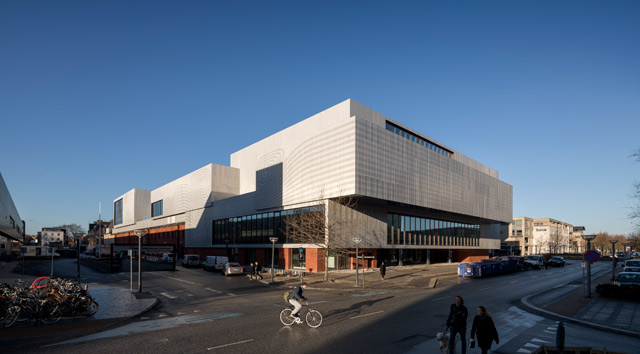 After three years of renovations anPhoto: Adam Mørk
The exhibition area of this new and improved science centre has been doubled and now boasts 16 interactive exhibitions focussing on science and technology, set in spectacular architecture by renowned Danish architects, CEBRA.
It also features the world’s first Interactive Film Theatre based on movement sensors. The Interactive Film Theatre was developed by Experimentarium and the Canadian science centre, Science North,  and made possible by a donation from TrygFonden. Whilst entertaining it has a serious purpose of getting people active and taking people away from their smart phones, iPads and other screens.
“We consume passive entertainment at an all time high and we surround ourselves with devices that help us do almost everything. But when technology and entertainment go hand in hand in the right way, we can also create physical experiences that inspire us to become more active — just like The Interactive Film Theatre does,” says Experimentarium project manager, Henrik Helsgaun. Photo: David Trood
This world class science centre is vital to Denmark as it plays an important role as an informal learning space and as a supplement to schools and upper secondary education. The interactive exhibits explore everything from the human body to the fascinating science of soap bubbles. An exciting addition is the rooftop terrace for outdoor activities.
“The new Experimentarium offers hours of phenomenal experiences. But Experimentarium can also be summed up in that single moment when the spark of curiosity ignites and you suddenly see the light in a new way. Curiosity is the stuff the Experimentarium is made of — and curiosity is where the discovery of science and technology starts,” says Kim Gladstone Herlev, CEO.
As you come to expect in Denmark, the building itself is also rather remarkable. CEBRA won the architectural competition in 2011 to design the new Experimentarium and its design makes the museum feel much bigger and lighter than the previous incarnation. Photo: Adam Mørk
The architectural centrepiece is the curving copper clad Helix staircase inspired by the DNA molecule’s spiral shape. The architects reused wall structures and foundations from the old Tuborg bottling plant, which was also the setting for the first Experimentarium, and added boxes to the shiny perforated aluminium exterior and large glass windows, creating a much lighter and open feeling.
The new Experimentarium expects half a million visitors in 2017 and hopes to attract more international tourists and day visitors from across Denmark and neighbouring Sweden.
For more information visit the website.
Url copied to clipboard!