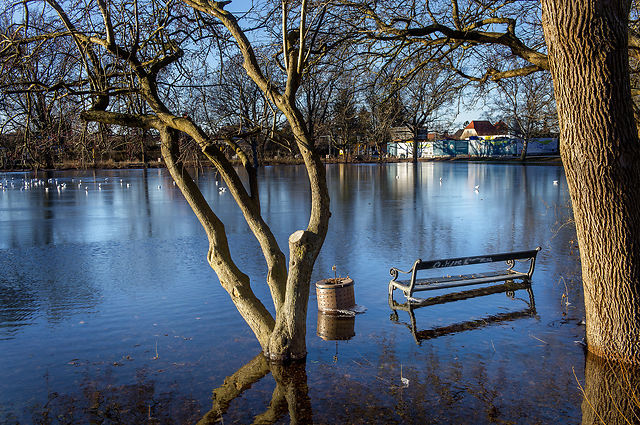 A football field in the Copenhagen suburb of Hvidovre resembled a lake after last week's storm. Photo: Bax Lindhardt/Scanpix
The Danish Meteorology Institute (DMI) said on Tuesday that storm-strength winds will batter the nation from the west, bringing precipitation and increased water levels along the west coast, the Danish Wadden Sea and the Limfjord.
“A low-pressure system over the Norwegian Sea will on Wednesday move over Scandinavia, where it will intensify. An associated front with strong winds and, in some eastern parts of the country, wintry precipitation will pass over Denmark from the west,” DMI said in a warning sent out before noon on Tuesday.
See also: IN PHOTOS: 100-year flood hits Denmark
DMI said that although water levels will rise along the west coast, the situation should not be as extreme as last week’s storm.
“It doesn’t appear that the winds this time will create as significant high water problems as what Denmark had last week. But the water levels could reach three metres in the Wadden Sea and up to 1.5 metres at Lemvig on Wednesday. That is above the warning threshold but not something that typically creates extreme challenges,” the institute wrote.
Despite being called a ‘100-year flood’, the water levels reached during last week’s storm were seen as recently as 2006 and many experts say that similar incidents will become more frequent as Denmark experiences the first-hand effects of climate change.
“The historically abnormal weather we’re seeing today with one low-pressure system after another, which among other things can result in flooding, is a reminder that climate change is in full swing,” Jens Hesselbjerg, a climate professor at the University of Copenhagen, told MetroXpress newspaper after last week’s storm.
A 2014 report from the Climate Ministry and DMI warned that Denmark will face more powerful storms, more heat waves, rising water levels and an average temperature that could rise by as much as 3.7C as a result of global climate change.
DMI also predicted that rainfall could increase by as much as seven percent over current levels, with extreme water levels that are currently seen only once every 100 years in Copenhagen occurring every second year.