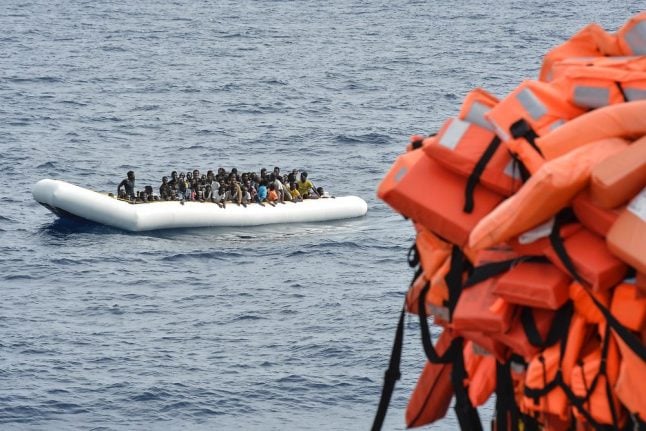 The MP later tried to clarify by saying he meant only "that warning shots should be fired". Photo: ANDREAS SOLARO/SCANPIX
Berth, who is his party’s EU spokesman, squared off with the Danish European Movement chairwoman Stine Bosse in a debate on Europe’s external borders for Europa Magasinet.
In one exchange, Berth said that migrants who try to reach Europe by boat should be shot.
“The only way you can do it effectively is simply to turn the boats away and say ‘You can’t sail into this territorial border, if you do you will either be shot or you will be turned around and sailed back’,” he said.
The debate’s host, Ole Stephensen, gave Berth the opportunity to clarify himself by asking if he really believed boats of migrants should be fired upon. Berth said it was “an example” of what could be done to protect the EU’s borders.
“We need to do what is necessary to ensure that the border is not violated,” he added.
His debate opponent Bosse seemed to hardly be able to believe what she had just heard.
“You cannot stand here and say that they be shot in the Mediterranean. I simply refuse to believe it,” she said.
As the clip of his comments began to circulate, Berth took to Facebook in an attempt to “address a coming press storm”.
“I of course don’t mean that a ship under the command of Nato or Frontex should shoot at migrants trying to cross the Mediterranean. What I mean is that warning shots should be fired at a vessel that is crossing into European territorial waters!” he said.
A lawmaker for the ruling Venstre party, Jakob Ellemann-Jensen, said on Twitter that the remarks were “not okay” and that “warning shots are… a warning of what is to follow.”
“Of course you don't shoot at people who are fleeing. It shouldn't be necessary to say,” Mette Frederiksen, the leader of the opposition Social Democrats, wrote on Facebook.
Berth’s debate remarks can be seen here.
According to the UN Refugee Agency, 2016 has been the deadliest year ever for refugees and migrants attempting to cross the Mediterranean, with at least 4,700 people having died or gone missing during their journeys.
Earlier this year, Berth was one of Denmark’s most vocal defenders of its controversial ‘jewellery bill’ when the provision allowing authorities to confiscate cash and valuables from arriving migrants began receiving extensive international attention. Here he is on CNN: