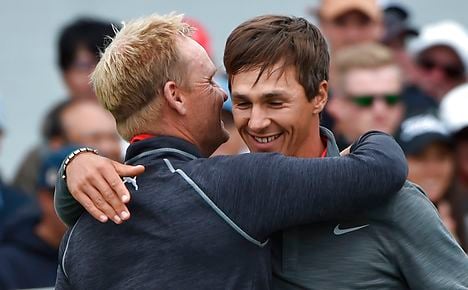 Thorbjørn Olesen (R) and teammate Søren Kjeldsen (L) of Denmark celebrate winning the World Cup of Golf on Sunday. Photo: Paul Crock/Scanpix
The pair displayed tremendous poise under pressure to hold off their challengers by four strokes to accomplish the biggest feat in Denmark's golfing history in the strokeplay team competition.
Denmark turned into the back nine at Kingston Heath with their four-shot overnight lead cut to just one, as a host of countries — including joint runners-up China, France and the US — queued up and waited for a stumble that never materialised.
The enigmatic 26-year-old Olesen and his veteran 41-year-old partner Kjeldsen instead played flawless fourball (better ball) golf as they made six birdies on the back nine to finish with a six-under 66 and a 20-under par total of 268 to win by four strokes for their first ever World Cup triumph.
When Olesen secured the historic trophy with a birdie on the 18th, he raised his fist to the crowd before embracing his team-mate Kjeldsen, who was playing in his sixth World Cup.
“We both came in good form this week and then we've just gelled so well,” Kjeldsen said before the pair hoisted the giant World Cup trophy.
“We've had an incredible week here in Melbourne, and I think a friendship has been built as well.”
The US$8 million event featured two-man teams from 28 countries and represented the biggest victory of each player's career, with world number 50 Kjeldsen and 70th-ranked Olesen both having won four times on the European Tour.
“It's been amazing, I love Australia. I have won in Perth also, so I don't know what it is about Australia,” Olesen said after seeing off the challenge of joint runners-up France, China and the US.
A nine-under round of 63 from Victor Dubuisson and Romain Langasque ensured France their highest finish in a World Cup, while a 65 from Wu Ashun and Li Haotong meant China came in on the same 16-under 272 mark as did the US team of Rickie Fowler and Jimmy Walker who carded a closing 66.
It was a big week for the Chinese, particularly 21-year-old Li, who followed up his 23rd place finish in the European Tour's Race to Dubai standings a week ago with a brilliant individual performance on Sunday.
A key moment came at the difficult par-three 15th hole after Kjeldsen found a  bunker and Olesen, under pressure, struck his tee hot gloriously to 10 feet and holed the birdie putt to give Denmark a three-shot cushion with three holes to play.
The duo were already boosted by Friday's incredible round of 60 which had placed them four shots better than any other team on the day.
Swedish duo Alex Noren and David Lingmerth finished in style with a 10-under par round of 62 that included six birdies on the back nine, to propel them to a fifth-place finish. 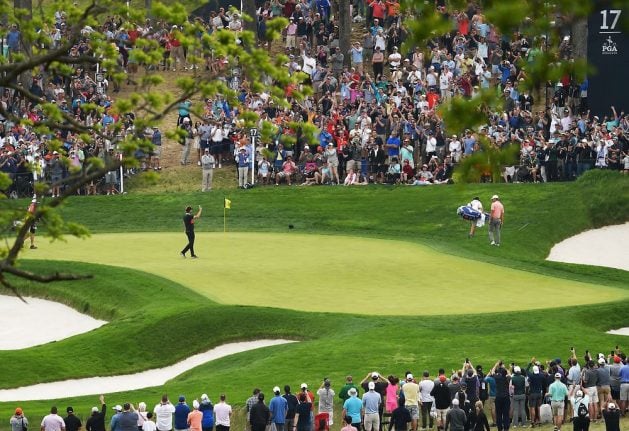 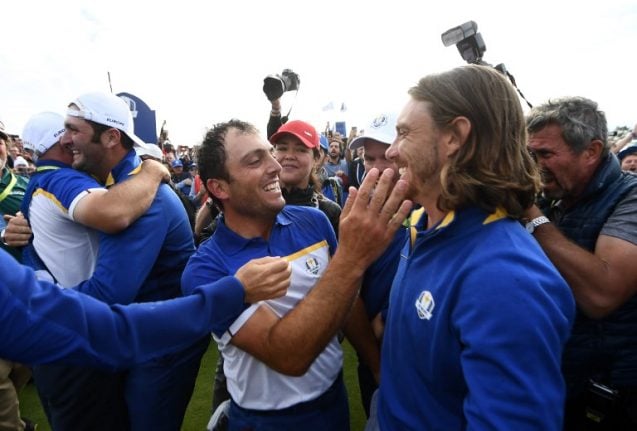 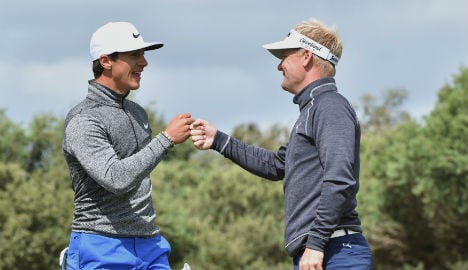