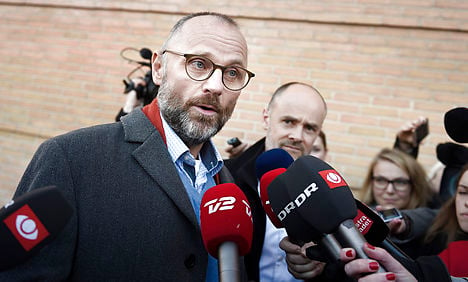 Henrik Qvortrup said he would consider filing an appeal against the court's decision. Photo: Liselotte Sabroe/Scanpix
Former Se og Hør editor Henrik Qvortup was handed a 15-month jail term, one year of which would be a suspended sentence if he performed 200 hours of community service, for masterminding the illegal monitoring of credit cards belonging to Danish royals and celebrities.
The arrangement involved the “systematic surveillance of a large number of publicly-known people's movements and thus a significant violation” of their rights, the Glostrup District Court outside Copenhagen said in a statement.
The fact that the intention was “to make money from delivering information of no societal value” was an aggravating circumstance, it said.
Qvortup, who has also worked as a political commentator and journalist for a number of other Danish media outlets, did not immediately say if he would appeal against the verdict. His lawyer, Anders Nemeth, said that his client could avoid actual jail time by serving his three month unconditional sentence in house arrest.
“I am naturally disappointed with the result. I had hoped for acquittal. I didn’t get it,” Qvortrup told reporters at Glostrup District Court.
Also sentenced to jail on Thursday was Peter Bo Henriksen, the so-called ‘hush-hush source’ at the credit card company Nets who provided Se og Hør journalists with the credit card records of celebrities and royals in exchange for payment. He received the harshest penalty, a 18-month unconditional sentence.
Three others, former editor-in-chief Kim Henningsen and journalists Kasper Kopping and Ken Rasmussen, received conditional sentences. Another former editor of the magazine, Per Ingdal, was acquitted.
Another two journalists and publisher Aller Media were in August given suspended sentences and a 10 million kroner (€1.3 million, $1.4 million) fine, respectively, after pleading guilty.
The so-called ‘Se og Hør case' came to light in 2014 when Rasmussen published a purportedly fictional book detailing how gossip magazine Se og Hør used credit card information to write stories about members of the royal family.
After a police probe, it was discovered that employees of the magazine had paid the Nets employee for confidential information. The illegally-obtained credit card details led to a series of celebrity scoops for the magazine, including one about Danish Prince Joachim's 2008 honeymoon in Canada, which had been kept secret.
Among the others whose private information was accessed by the gossip mag are PM Lars Løkke Rasmussen and actor Mads Mikkelsen.
Many observers have drawn parallels with Britain's News of the World, which was shut down by Rupert Murdoch in July 2011 following allegations of widespread phone hacking.