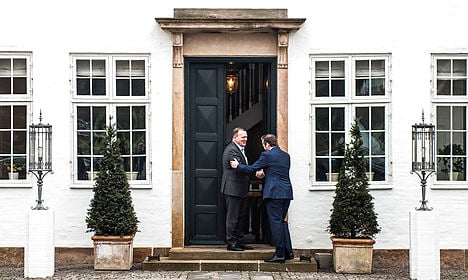 PM Lars Løkke Rasmussen greets LA leader Anders Samuelsen for the start of new government talks. Photo: Ólafur Steinar Gestsson/Scanpix
In an unexpected move, Rasmussen invited the two support parties to formally join his Venstre government in a new “three-leaf clover” setup.
“I know that a four-leaf clover is the one that brings good luck. But there are more three-leaf clovers, and that is very good symbolism. Because if we create a new government, it won’t be for the few but for the many,” he said at Venstre’s national meeting over the weekend.
Rasmussen's centre-right Venstre party holds only 34 out of 179 seats in parliament and needs the support of the anti-immigration Danish People's Party (DF), the libertarian-leaning Liberal Alliance (LA) and the Conservatives to govern.
His overture to LA and the Conservatives comes after months of election rumours fuelled by ultimatums and open bickering amongst the government’s support parties in the so-called ‘blue bloc'. The bloc's disagreements recently forced Rasmussen to drop his grand vision for a 2025 Plan.
The largest support party, the anti-immigration DF, has opted out of the talks to form a new government, saying it believes it can continue to have the most influence from the outside.
But LA party leader Anders Samuelsen, who has repeatedly threaten to topple the government if Rasmussen does not meet his demand for tax cuts for the wealthiest Danes, accepted the invitation and has now backed down from his ultimatum.
Samuelsen said on Monday that he was willing to soften his demands for tax cuts in exchange for his party joining the three-party coalition.
“It was only because we didn't manage to get into government that we had to push so hard for this,” he told reporters before meeting with Rasmussen.
Conservative leader Søren Pape Poulsen also accepted the PM’s invitation, so the three party leaders spent Monday negotiating not only the hot-button issue of topskat, a 15 percent tax paid by those who earn over 459,200 kroner ($69,000, €61,700), but also the creation of a brand new government.
While it was merely speculation on Monday morning, many political commentators expected Rasmussen to offer five to six ministerial posts to Liberal Alliance and two to three to the Conservatives.
Recent polls show that Denmark's centre-left opposition would most likely win if Rasmussen were to call a snap election, after support dropped for DF following a string of EU expenses scandals.