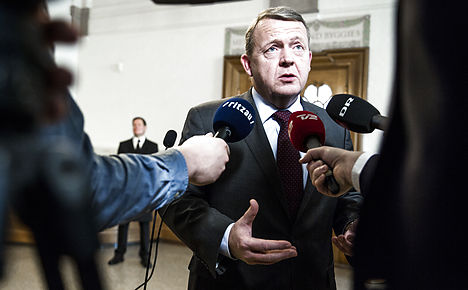 PM Lars Løkke Rasmussen said his conversation with the president-elect was "friendly and constructive". Photo: Nikolai Linares/Scanpix
The two men discussed a number of items over the course of their ten-minute conversation but the main focus was defence and security.
“We had a friendly and constructive chat, in which I stressed that Denmark is a close ally of the US and has been for decades. We stand shoulder to shoulder with our American friends in the fight for a more secure world,” the PM said in a statement.
In his victorious election campaign, Trump caused some Western leaders concern with his comments about Nato and threats that other nations need to live up to their spending requirements if they are to rely on the United States to come to their aid. Nato has a spending target of two percent of a country's GDP, something Denmark doesn’t currently meet. According to Nato figures, Denmark uses 1.17 percent of its GDP on defence.
Rasmussen said that Denmark would increase its defence spending.
“Currently Denmark is contributing substantially to the fight against Isil’s [one of many terms used for the terror group Islamic State, ed.] regime of terror in Syria and Iraq. Moving forward, the government plans to increase spending on the military and national security,” the PM wrote.
Rasmussen said that he did not doubt that the United States would maintain its strong commitment to Nato and Western allies.
“We need a strong United States that leads the free world. I feel convinced that the US will also take on that role going forward,” Rasmussen’s statement continued.
The PM said his conversation with Trump ended with the president-elect expressing his fondness of Denmark, a country that continuously popped up through the course of the US presidential election.
“Donald Trump told me that through his family relationships he has an incredibly positive impression of Denmark as a country and the Danes as people, and that he’d like to see me in Washington DC,” Rasmussen said.
Trump’s outreach with world leaders has been under intense scrutiny since his surprise victory last week. The New York Times and other media outlets have reported that Trump’s transition has been chaotic and that world leaders have been “blindly dialling in to Trump Tower” in attempts to reach the incoming president.
Trump, however, took to his favourite media, Twitter, to attack the Times’ reporting.

I have recieved and taken calls from many foreign leaders despite what the failing @nytimes said. Russia, U.K., China, Saudi Arabia, Japan,

Australia, New Zealand, and more. I am always available to them. @nytimes is just upset that they looked like fools in their coverage of me.