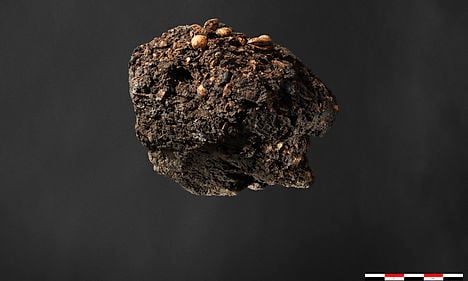 The so-called 'bishop's clump'. Photo: Rogvi Nolsøe Johansen/Scanpix
Researchers discovered the faeces way back in 1937 when a bishops' palace was demolished in Aalborg. Nearly 80 years later, researchers have taken a renewed interest in what has been dubbed “the bishop clump” as part of a project tracing immigration into Denmark between 1450 and 1650.
“This is totally unique. As a historian, I am very, very pleased. It is extremely interesting because we get to come in such close contact with a well-known family’s daily consumption and the food of the 17th century,” Jakob Ørnbjerg of Aarhus University told TV2 News.
Ørnbjerg’s colleague, archaeobotanist Peter Mose Jensen of Moesgaard Museum, has closely examined the poo and found traces of cloudberry, blackcurrant and buckwheat.
“I have simply taken it apart, ever so carefully,” Jensen told TV2.
The buckwheat traces even allowed researchers to make an educated guess as to who actually dropped that turd so long ago.
Their work led them to Bishop Jens Bicherod. Bicherod was born in 1658 in Odense on the island of Funen, the primary source of buckwheat at the time. He became the bishop of Aalborg in 1693 and remained there until his death in 1708. The combination of the clump's location in the latrine of the Aalborg bishop’s palace and the presence of buckwheat makes them fairly confident they've found their man.
Ørnbjerg cracked that it was a case of “making history through the back door”.
“This little piece of crap is a little piece in the story of our shared history and how Denmark became what it became,” he told TV2.