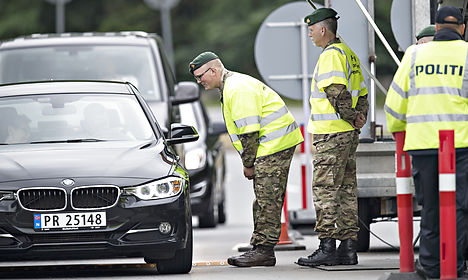 Border checks will continue through February. Photo: Claus Fisker/Scanpix
The measures will now be in place until February 12th, 2017.
Denmark’s extension follows similar moves by Scandinavian neighbours Sweden and Norway and comes after the European Commission gave its approval for the five countries who introduced temporary controls in the wake of last year’s refugee crisis to renew the measures again.
In addition to the Scandinavian nations, the other countries to implement controls are Germany and Austria.
Integration Minister Inger Støjberg said she was “very satisfied” that Denmark was granted permission to keep the measures in place.
“As long as there is no control on Europe’s outer borders, we must control ourselves who crosses the Danish border,” she said in a statement. “I still see a very serious risk of refugees and migrants who do not have the correct ID papers will be stranded here in our country if they cannot travel on to Sweden.”
“Therefore, it is still necessary to have border controls,” Støjberg added.
Denmark’s control measures on its border with Germany were first implemented on January 4th in response to a similar move by Sweden.
The number of refugees coming to Denmark has plummeted since the controls were put in place. Through September, some 5,300 people had applied for asylum putting the Scandinavian country on pace to end the year well below the 21,000 asylum applications it received in 2015.