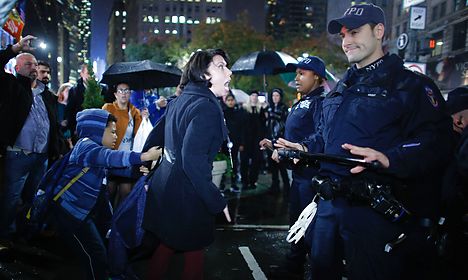 A woman argues with police officers in New York City in one of the many protests to break out after Donald Trump's election. Photo: KENA BETANCUR/AFP/SCANPIX
The campaign lasted nearly two years and the campaigns of Trump and his rival Hillary Clinton spent a combined $690 million to turn out only one half of all eligible American voters.
When it was all said and done, the person who received the most votes did not win the presidency due to the complexity of the electoral process.
For Americans disenchanted with the process and the outcome, it seems like there must be a better way. There is.
In Denmark, elections last a mere three weeks, campaigns focus on the issues, TV ads are basically non-existent and over 85 percent of the electorate turns out to vote.
Denmark’s election process is so good, in fact, that it was rated the best in the world in the Year in Elections report by the Electoral Integrity Project, an independent research group affiliated with Harvard University and the University of Sydney.
See also: Denmark's elections are the 'best in the world'
Released in March of this year, the study ranked the US system just 47th and singled out its two most recent elections at the time – the 2012 Presidential election and 2014 Congressional election – as the “worst of any long-established democracy”. One can hardly imagine the 2016 Presidential election doing anything to improve the situation.
With that in mind, The Local spoke with Jens Olav Dahlgaard, a PhD candidate at the University of Copenhagen who specializes in voter turnout and voter behaviour.
Dahlgaard said there are several factors to explain the huge gap in turnout between the two countries.
“First of all, we don’t have voter registration in Denmark, which is very important because that process creates an extra burden,” Dahlgaard began.
“Secondly, you have to look at the proportional system. With Denmark being a much smaller country, a Dane may feel like their vote counts more than, say, a voter in a state like California that always selects the Democratic nominee,” he continued.
He said the final reason more Danes are likely to vote simply comes down to cultural differences.
“Scandinavian countries in general have high turnout rates. We have quite strong civil norms and voter turnout is seen as a civic duty,” Dahlgaard said. In Danish elections, the heads of the major parties face off in a number of debates. File photo: Keld Navntoft/Scanpix
Short and intense
Another major difference between the two countries is the length of their campaigns. In Denmark, it is solely up to the prime minister to set a parliamentary election date, as long as it is done within four years of taking office. Once the prime minister calls for the election, the campaign lasts just three weeks.
During that short time, there are a number of debates involving the leaders of all of the country’s nine political parties, a number that is likely to increase by at least two in the next election.
The US, by contrast, uses a fixed term election process that results in what seems like never-ending campaigns that can bring the two-party legislative system to an effective halt.
Dahlgaard said there are pros and cons for both systems.
“In the US, people become fed up and can’t wait for the election to be over. People don’t get as worn down by it in the Scandinavian system,” he said.
“However, you can also argue that the fixed terms are more fair. Variable terms give the incumbent an unfair advantage, because they can strategically decide when to hold elections,” he continued.
He added that the US primary elections add an important part to the process that is bypassed in Denmark, where the parties use internal processes to select who will represent them.
Faith in the system
The US system resulted in Clinton receiving more overall votes than Trump, but still losing the presidency due to electoral college math. That outcome, combined with the inflammatory rhetoric Trump and his supporters employed on the trail, now has Americans in the streets contesting the results.
Protests would almost have certainly broken out had Clinton won as well, given Trump’s repeated claims of a “rigged” system.
Such scenarios are unthinkable in Denmark, where people have high levels of faith in their system and elected officials.
“People believe the system is fair and not biased toward anyone,” Dahlgaard said. “We have set up a very reliable, fair and transparent system.”
In a Danish election, voters receive a ballot that varies based on which of the country’s ten large constituencies they live in. Voters can choose to either vote for a political party or for a specific individual. After mandates are distributed based on voter results, the parties then determine who gets the parliamentary seats based on the number of personal votes.

File photo of Lars Løkke Rasmussen voting in the 2015 election. Photo: Scanpix
The system is not flawless. The June 2015 election brought Prime Minister Lars Løkke Rasmussen to power despite his Venstre party finishing in third place with just 19.5 percent of the vote.
The Social Democrats received the most votes overall, but lost the PM position and were left in opposition. The so-called ‘blue bloc’ of centre-right parties threw its support behind Rasmussen, led by the anti-immigration Danish People’s Party (DF), which is the bloc’s biggest party in terms of parliamentary seats.
Despite DF receiving 21.1 percent of the vote, however, coalition talks between the right-of-centre parties failed. As a result, Denmark has a one-party minor government that is supported by DF, the Conservatives and Liberal Alliance, the latter of which is now threatening to topple the government over tax breaks.
Money and advertising
While the Danish system may be more complex than the American one, it is significantly less expensive.
“Of course there is also money in Danish politics. You have money clubs that support parties. Traditionally, the unions support the Social Democrats with a lot of money while employers and the DI [the Confederation of Danish Industry, ed.] support right-wing parties,” Dahlgaard said.
“There is a strong correlation between who gets the most money and who gets the most votes. But it’s a case of the money going where the votes are rather than influencing voters. I think it’s fair to say that a Danish campaign costs next to nothing compared to an American campaign,” he added.
Dahlgaard said he was in Iowa in February ahead of that state’s first-in-the-nation caucus and the onslaught of TV advertisements was like nothing he has ever experienced. Danish parties tend to focus their advertising efforts on traditional election posters and social media rather than flooding the airwaves with paid ads.
And the biggest post-election unrest in the streets is likely to be handing out small fines to the parties who do not promptly remove their posters once the process wraps up.