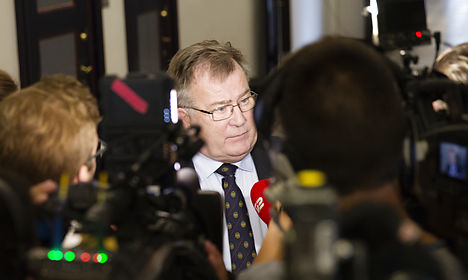 Danish Finance Minister Claus Hjort Frederiksen said he fears the "unpleasant consequences" of a Trump win. Photo: Jens Astrup/Scanpix
Frederiksen told financial daily Børsen that Trump’s stated trade policy will adversely affect Danish companies.
“He is against free trade; I’ve fought for that for all these years because free trade ensures our prosperity and we are all made richer by free trade. He wants to build walls. In my opinion, that is not the way forward,” Frederiksen said.
As directly by Børsen if he thought Denmark would become poorer with a Trump victory, Frederiksen responded “yes, I actually think so”.
The Danish finance minister said Trump’s repeated criticisms of international trade agreements will cause major uncertainty in the global markets.
See also: 'Denmark needs an open America'
“I think it will have negative consequences because the uncertainty will be so great that many companies with think twice when it comes to investments,” Frederiksen said.
United States is Denmark’s third largest export partner, accounting for nearly ten percent of Denmark’s total exports. Denmark's exports of goods and services to the US amounted to more than 100 billion kroner ($14.8 billion) in 2015, according to Statistics Denmark.
Over 50,000 jobs in Denmark are directly tied to Danish exports to the US.
If Trump were to implement trade tariffs, it could be a serious blow to Danish firms, Frederiksen said.
“If Donald Trump is elected I’m afraid that it will have some unpleasant consequences. I think many will speculate about what it will mean for free trade, what it will mean for investments and so on, if that uncertainty enters the picture,” he told Børsen.
Frederiksen added that much of what he has heard Trump say through the course of the long election campaign “is the opposite of what I have personally fought for throughout my political career”.