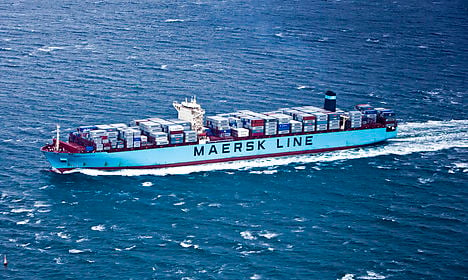 Photo: Asger Ladefoged/Scanpix
However the company, which is in the midst of splitting off its oil and oil-related businesses, said profit rebounded in these units.
Overall, the group's sales contracted nine percent to $9.2 billion.
“The result is unsatisfactory, but driven by low prices,” chief executive Søren Skou said in a statement.
He pointed to freight rates down by 16 percent from last year, which pushed Maersk Line into is second straight quarterly loss.
The net loss of $116 million compared to a profit of $264 million in the July through September period last year.
The loss came despite the container industry witnessing its first major bankruptcy in 30 years, when the world's seventh largest carrier, South Korea's Hanjin, filed for receivership in August.
Maersk Line experienced short-term increased demand for its services in the transpacific trade as a consequence, and freight rates increased by five percent from the second quarter.
In the past, the group's oil operations have helped offset downturns in the shipping sector when oil prices rose.
But facing headwinds in both sectors, Maersk said in September that it would split the the group into separate businesses for transport and energy.
Wednesday's results sent the company's shares eight percent lower in morning trading on the Copenhagen bourse, where the main index was down by 1.4 percent.