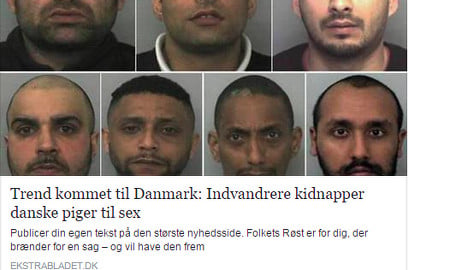 The article became the second highest trending article on Daish media. Photo: Screen Grab
The Ekstra Bladet newspaper published the article, ‘Trend comes to Denmark: Immigrants kidnap Danish girls for sex' in the “People’s Post” section of its website, where users can post their own articles.
The text asserted with little evidence that Muslims were over 200 times more likely to kidnap women for the purposes of sex slavery than non-Muslims.
As the story took off on social media, the newspaper drew strong criticism from politicians and journalists.
The Chairman of the Danish Journalism Union Lars Werge warned that the newspaper was damaging its credibility in a tweet to editor Poul Madsen.

Andreas Hemmeth, press spokesman for Radikale Venster, said that many people on social media had believed that the article was a genuine piece of journalism

Nonetheless, the paper’s editor stuck by the story, claiming that the reader's articles section was the “reader’s own universe”.
However, as pressure built up, the newspaper finally pulled the story.
“Agreed,” wrote Madsen. “That is over the line”.

Mads Kæmsgaard Eberholst, an associate professor at Roskilde University, told the Politiken newspaper that readers often found it difficult to distinguish between such reader-generated content and articles written by professional journalists.
“It is problematic because the 'People's Voice' section is simply not signalled clearly enough,” the told Politiken. “This post will be shared and read enormously, and we know that people who share on social media typically do not read more than the headline of what they share. This means that a lot of people get the impression that this is a journalistic truth delivered by Ekstra Bladet, and not a reader’s personal position,” he said.
Url copied to clipboard!