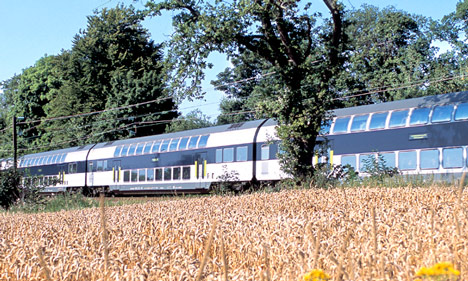 ID checks have delayed almost half of all passengers along the affected route. Photo: DSB/René Strandbygaard
The border measures implemented in January of this year as Denmark struggled to control an influx of refugees and migrants have so affected train commuters that rail operator DSB has had to change its operating schedule.
Train passengers are required to show valid ID if they are crossing into Denmark at Padborg and the police checks are so time-consuming that the Kolding-Padborg/Sønderborg train is the most delayed route in all of Denmark.
Only 54.8 percent of passengers have made it to their destination on time along the stretch this year.
“It was supposed to be random passport control but it turned in to police going into all trains. That takes a few minutes each time and we count delays beginning after three minutes. Therefore it doesn’t take much before a train doesn’t leave on time,” DSB spokesman Tony Bispeskov told TV Syd.
To cope with the delays, the rail operator said it has been forced to change its timetables. Beginning on December 11th, scheduling will include a four to five minute stop in Padborg. DSB will also drop its direct route from the northern German town of Flensburg to the northern Jutland city of Aalborg. Instead, the train will stop in Aarhus, some 120 kilometres to the south.
Denmark’s border control measures were implemented in January and were then extended seven different times. The most recent extension of the measures will remain in place until November 12th, at which point the government will decide whether to extend them again.