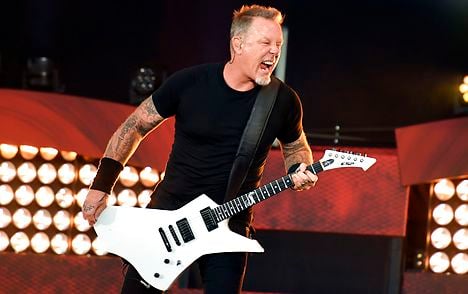 Metallica's James Hetfield at the 2016 Global Citizen Festival in New York City's Central Park on Saturday. Photo: Angela Weiss/AFP/Scanpix
When Royal Arena opens its doors for the very first time, it will be to host a concert by the world’s biggest heavy metal band, Metallica.
The band announced the shows on Monday, saying that their February 3rd and 5th concerts at the brand-new arena would be their only appearance in Europe until the end of 2017.
The legendary band’s Danish drummer, Lars Ulrich, said it was an honour to be chose as the venue’s first act.
“Metallica will open the new arena! We are incredibly excited about it. We are proud and grateful that we are the first band that will come through the doors and inaugurate the new arena. It has been awhile since we were last in Denmark – in Horsens a few years ago – so we are very excited to come back to my fatherland and play songs from the new album,” Ulrich said in a statement released by Live Nation Denmark, referring to the band’s upcoming album ‘Hardwired… To Self-Destruct’, due for release in November.
See also: The best album ever recorded in Denmark just turned 30
The CEO of Royal Arena said Metallica’s appearance was a booking coup of epic proportions.
“When a world-class name like Metallica goes a few extra miles to open Royal Arena with a unique double bang, it immediately places Copenhagen’s new arena among the global elite. We are both proud and humbled by the band’s gesture,” Dan Hammer said.
Tickets for the concerts go on sale Friday, September 30th at 10am via Ticketmaster.