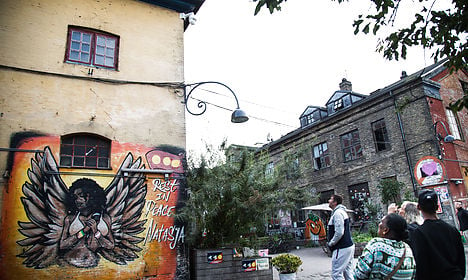 Two police video cameras were installed in Christiania on Friday and more will come, police said. Photo: Martin Sylvest/Scanpix
Copenhagen Police installed two surveillance video cameras in Pusher Street in an ongoing effort to cripple the area’s cannabis trade following the shooting of two police officers and one civilian on August 31st.
“We set two up today. The rest will come. I can’t give an exact number on how many we will need but there will be a few added each time,” Dannie Rise of Task Force Pusherstreet, the police unit assigned to Christiania’s cannabis market, told TV2.
Just a matter of hours after the cameras were installed however, broadcaster DR reported that one had been torn down and the other had been covered by a large black plastic sack.
See also: Will Christiania become a mass surveillance zone?
Both onlookers and police had predicted on Friday morning that the cameras might not be allowed to hang for long before someone took action.
“We’re anxious to see if the pushers will vandalize them. They will naturally be a bit inconvenient for their working conditions,” Rise told TV2.
A Christiania spokesperson said that he thought one of the cameras was torn down by mistake.
“We saw that there were apparently some people from Pusher Street who had put masks on and felt very provoked by the cameras and blocked them off. It was likely an accident that the one fell down. It should have just been covered up,” Ole Lykke told DR.
In addition to the cameras, visitors to Christiania will now be greeted by signs telling them that the area is under police watch. Rise said he thinks the camera and signage will deter Denmark’s weed smokers.
“We hope that the buyers see these signs and think ‘err, maybe I should go somewhere else to buy’,” Rise said. Someone smokes a joint under the watchful eye of Big Brother. Photo: Martin Sylvest/Scanpix
Christiania residents agreed to the video surveillance last week in what Copenhagen Police hailed as a “landmark” breakthrough in the relationship between the alternative enclave and law enforcement.
Police have said that the cameras will only be temporary but have offered no timeline for their eventual removal saying only that they will remain in place “for as long as it’s needed”.
“Only time will tell whether it takes three, six or 12 months. As long as we can identify buyers and sellers, we will do it. We are well aware that it goes against the principles of many Christiania residents to be under surveillance,” Rise said. A sign opposing the police cameras in Christiania. Photo: Martin Sylvest/Scanpix
One of the police officers in the August 31st Christiania shooting remains in critical condition while the other two men escaped serious injury. 25-year-old Mesa Hodzic, the presumed gunman, was shot by police during his arrest and subsequently died from his wounds.
The shooting and the subsequent decision to tear down the cannabis stalls in Pusher Street have led to a renewed debate on legalizing cannabis. But with the three largest political parties – Venstre, Social Democrats and Danish People’s Party – opposed, there is little chance of it happening.