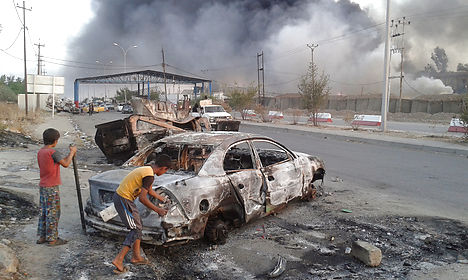 File photo of children next to a burnt vehicle during clashes between Iraqi security forces and Isis in Mosul, Iraq . Photo: Stringer/Reuters/Scanpix
Denmark will take the lead in a new effort by the international coalition against Isis to drain the extremists of money.
The group focusing on Isis’s finances will be headed up by Jens Madsen, a former PET head and the current leader of Denmark’s national fraud squad, Bagmandspolitiet.
Danish Foreign Minister Kristian Jensen welcomed the nation’s leading role in the effort.
“Many focus on the fight against ISIL militarily. That’s important but it is just as important to stop the supply of foreign fighters, money and propaganda,” he told news agency Ritzau, using one of the alternate names for the terror group.
Part of the effort will focus on training officials from Iraq’s central bank and intelligence services on how to identify money intended for the terrorists.
“They are the ones on the frontline when it comes to stopping the resources. They need to learn to follow the money; they’ll learn which signals and warning signs to be aware of while monitoring the flow of money,” Jensen said.
Madsen said getting the Iraqi officials up to speed is key to the coalition’s plans.
“It’s important to support the authorities [in Iraq] so that there are more effective services for fighting terrorism,” he told Ritzau.