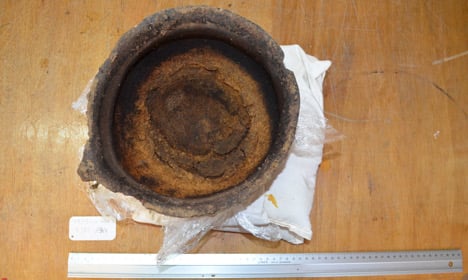 Archeologists believe that the substance in the pot was cheese that "must have smelt terrible". Photo: Museum Silkeborg
Archaeologist Kaj Rasmussen from Museum Silkeborg told Science Nordic that his team was already excited about having discovered an extremely well-preserved Bronze Age pot in what used to be an open pit.
But their excitement was compounded when they discovered that the pot had the remains of a substance burnt into its inside. The Bronze Age pot was extremely well-preserved. Photo: Museum Silkeborg
“Normally, you find black, charred deposits in the remains of pots that are typically from corn or seeds.  But here we found a white-yellow crust that we hadn’t seen before,” Rasmussen told Science Nordic.
His team sent a sample of the material in to the National Museum of Denmark for an analysis and were surprised to hear that chemists came to the conclusion that the material was most likely bovine fat.
Based on that analysis, Rasmussen came to the conclusion that what they had unearthed was probably a 3,000-year-old cooking failure.
“The fat could be a part of the last traces of curds used during the original production of traditional hard cheese. The whey is boiled down, and it contains a lot of sugars, which in this way can be preserved and stored for the winter,” he told Science Nordic.
See also: Really old stinky cheese found on royal Swedish shipwreck
“I cannot help but wonder if someone had a guilty conscience. It’s well and truly burnt and must have smelt terrible,” Rasmussen said, adding that the cheese-making attempt must have been pretty terrible to warrant throwing out the entire pot.
The cheese find is the latest in a long line of historical discoveries in Denmark that have proven so numerous that the National Museum is having a hard time keeping up.
Some of the more notable recent discoveries have included a still-sharp Bronze Age sword, the largest-ever find of Viking gold, an 1,100-year-old crucifix that may change the understanding of when Christianity came to Denmark, a hoard of 700 year-old coins, some 2,000 gold spirals used by sun-worshiping priest-kings during the Bronze Age, and a ‘lost’ rune stone that turned up in a farmer’s backyard.