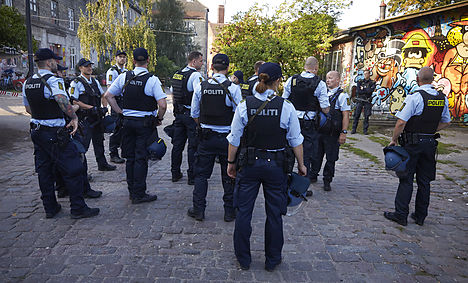 Officers have started a private collection fund for their injured colleague. Photo: Jens Astrup/Scanpix
Two police officers and a civilian were shot on Wednesday night in a drug bust gone awry. The suspected gunman, 25-year-old Mesa Hodzic, was later shot by police while being arrested and died from his wounds on Friday.
The officer who was shot in the head is still in critical condition and very much in his colleagues’ thoughts. According to the chairman of the Copenhagen Police Union, police have started a private collection to help the injured officer and his family.
“I’m really pleased and proud of the support. Police officers from the whole country have donated but we’ve also received support from football clubs and shooting unions,” Michael Møller told DR’s Aftenshowet.
Møller declined to say how much money had been raised, but said it would likely go to the rehabilitation that the injured officer will likely have to undergo.
The injured officer’s girlfriend is also pregnant, so some of the funds will go to support her and the couple's coming child.
Last week’s shooting in Christiania led to the historic decision to shut down the alternative enclave’s open-air cannabis market known as Pusher Street. Residents cleared the cannabis stalls on Friday but there have been reports that cannabis sales are still taking place in Christiania and the surrounding area. Others on social media have reported that the cannabis trade has already spread to new parts of Copenhagen.