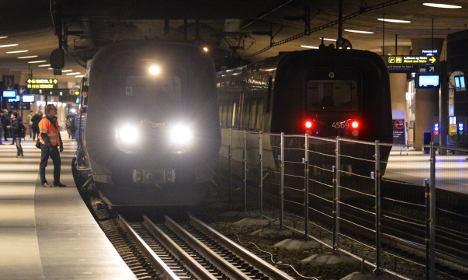 Robel Kidane had meant to travel between Vellinge and Osby in southern Sweden but got on the wrong train and wound up in Denmark. When he and Red Cross worker Mikael Kinning contacted authorities for help he was instead removed from the asylum register and told he would have to reapply for asylum if he managed to return.

The pair initially did not know how they would get the boy back across the bridge to Sweden, where police border and ID checks have been in place for around ten months. But when Kinning visited Kidane at his temporary asylum youth home in Denmark to go out for pizza together in Odense on Thursday he decided to take his chances.

“When we were in the car I asked Robel if he wanted to have pizza in Sweden instead. He did,” Kinning, who works with the Red Cross in Vellinge, told the Sydsvenskan newspaper which first broke the story.

“We work with these guys and you can say that they get under our skin. And when you see what happens to them and they get stuck in Denmark unintentionally you have to act in some way. You have to test the system and see if it works,” said Kinning.

When they reached the police border control, Kinning showed his own ID and a copy of Kidane's ID for asylum seekers in Sweden and was let through.

“We've taken the first step now. He's back in Vellinge. He's going to stay here. This is where he goes to school, this is where he has his friends,” he said.

Kinning will now try to get Kidane's asylum application case file reopened. If not, he will have to reapply for asylum under Sweden's tough new rules which mean he will no longer be able to apply for permanent residency and can hope for a temporary permit at best.

But despite his uncertain future, Kidane said he was happy to be back in Sweden, where he has lived since August last year.

“It is great. I am very happy. Three weeks is a lot. In Denmark I was angry, very angry. In Sweden everything feels good,” he told Sydsvenskan.