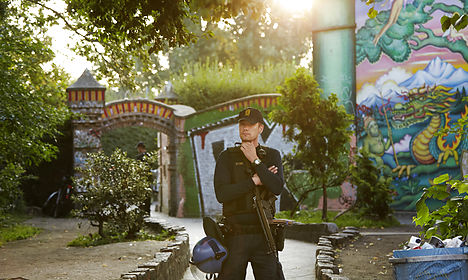 The terrorist monitoring group SITE Intelligence cautioned that there is no evidence to support Amaq's claim. Photo: Jens Astrup/Scanpix
The 25-year-old, named by local media as Mesa Hodzic, shot two police officers and a civilian on Wednesday, and died Friday of gunshot wounds he sustained during his arrest.
“The perpetrator of the attack that targeted the police in Copenhagen is a soldier of the Islamic State and carried out the operation in response to calls to target the countries of the coalition,” Amaq said, citing an unnamed source, referring to an international alliance battling Isis in Syria and Iraq.

#ISIS 'Amaq reported from a “source” that the #Copenhagen police shooter was a “soldier of the Islamic State” pic.twitter.com/oRM5ZhffT9

Copenhagen Police said Hodzic had links to the radical Islamist group Millatu Ibrahim and that he sympathised with IS, but that there was no evidence that extremism had inspired the shooting.
Police on Friday had no immediate comment to Amaq's claim, but terrorist monitoring organization SITE Intelligence Group expressed doubts about the report from the news outlet, which many terrorism experts say operates as Isis's defacto media arm.

2) Hodzic had to be known to authorities as a member of the radical group Millet Ibrahim in Denmark. pic.twitter.com/edQN94uP2M

In addition to three counts of attempted murder, Hodzic had faced preliminary charges of possessing a firearm and trafficking 48 kilos of cannabis, 2.7 kilos of skunk — a powerful type of marijuana — and over 1,800 joints.
He was described by police as a regular in Christiania, where he reportedly came cycling on Wednesday to collect the day's takings from a stall in the neighbourhood's infamous open air cannabis market, which is controlled by criminal gangs.
The 25-year-old came to Denmark from Bosnia and Herzegovina aged four, and was arrested in 2010 along with his father and brother on suspicion of repeatedly stabbing a man with a kitchen knife, but was later freed, according to Danish news agency Ritzau.
He had also been arrested on suspicion of committing a violent assault with a knife in 2007.
Following Wednesday's shooting, Christiania residents decided to tear down Pusher Street and have asked the public to no longer buy cannabis in the alternative enclave, which was founded by squatting hippies in the 1970s and has a long history of openly selling cannabis.