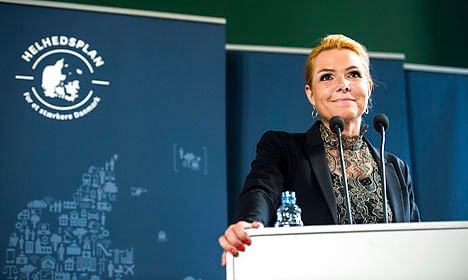 Integration Minister Inger Støjberg presented yet another round of tighter immigration proposals on Tuesday. Photo: Ólafur Steinar Gestsson/Scanpix
Since coming to power in June 2015, the only focus of Denmark’s current government seems to be immigration.
From publishing the controversial advertisements in Lebanese newspapers, to breaking promises to Green Card holders, making life harder for foreigners and their Danish spouses, and introducing a citizenship test that not even the natives can pass, this government seems hell-bent on destroying the image of this lovely country.
The Venstre government, along the rabidly anti-immigration Danish People’s Party (DF), is locking every door possible in a bid to keep foreigners out. Their wish is to make Denmark as white as possible, as evidenced by DF’s much-discussed advertisement campaign over the summer.
Now the government has released its 2025 Plan and announced its intentions to introduce even more restrictions on the immigrants who already call Denmark home. It also wants to make the nation even less attractive to newcomers at a time when asylum numbers and overall immigration are already down, thanks to previous rounds of 'tightening', as the government likes to call it.
This is a total disgrace to the Danish values of acceptability and multiculturalism.
Of the 44 new immigration measures touted by the government, many target the already difficult permanent residency rules. Just in January of this year, the government already made it harder to obtain permanent residency. Hundreds upon hundreds of applicants who otherwise had fulfilled every requirement had permanent residency pulled out from under them due to the new rules and the controversial decision to apply them retroactively.
See also: Denmark wants it to be even harder to get residency
Those affected include students, Green Card holders and other foreigners who have lived in Denmark for more than five years. In January, they were told that it would now take six years to become eligible for a permanent residence card. Now the government wants to make it eight.
Foreigners also face continuously changing demands. First they had to have worked for three of the past five years. Then 2.5 of the past three. Now apparently it will be 3.5 of the past four.
The dilemma is that until now no one has applied for permanent residency under the new rules introduced in January this year as one has to wait for yet another year of stay in Denmark to make it to the magic number of six. Now it looks like we’ll have to wait an additional two years.
But it gets worse. If a foreigner wants to bring a family member or spouse to Denmark, he or she would have to wait for 11 years under the new wishes of the government, as it is already in law that after getting permanent residency, one must wait for three years before applying for a family reunification visa. An 11 year wait just to be allowed to live with his/her family in Denmark. We can not find such extreme examples anywhere in the world.
While fully respecting the Danish democratic system, I believe it is unfair for parliament to consider these new proposals without first having received feedback from those who would be directly affected by them.
If the government plans to implement stricter rules for residence in Denmark, that is its own decision, but those of us who have already lived for five or more years and have done everything by the book to live up to the old rules would once again be cheated if these new plans become reality.
A fairer scenario would be to only apply any new rules to those who have yet to come to Denmark, not those of us who have come here under a different set of rules and followed them.
If these new proposals are passed in parliament, it would mean that those who were suppose to get permanent residency in January 2016 will have to wait until January 2019. This will surely spread a further feeling of distrust among all immigrants.
Denmark’s unpredictable and controversial immigration policies also sends the wrong message to the world about this country that we call home.
I urge Danish politicians to strongly oppose the government’s unjust plans. Naqeeb Khan is a graduate of University of Glasgow, Scotland and currently residing in Denmark. He is president of Green Human Resources and executive member of Danish Green Card Association (DGCA).