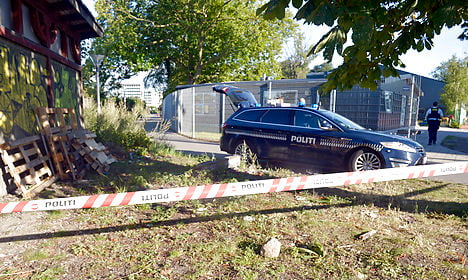 The woman was found near a football field in Østerbro some nine hours after the attack. Photo: Ida Guldbæk/Scanpix
The 38-year-old woman left her home between 4.30 and 5am for a jog in the city’s Østerbro district. When she didn’t return, her family contacted police. Officers searched for the woman but she wasn’t found until over nine hours later when a family member discovered her behind some bushes at a football field shortly before 3pm.
She was taken to Copenhagen's Rigshospital and put in a medically induced coma. By Tuesday evening, officials said she was out of critical condition.
Police appealed to the public for help on Tuesday night and by early on Wednesday morning they had arrested a 29-year-old man who was seen in the area of the attack on surveillance video.
Copenhagen Police spokesman Hans Erik Raben told Ritzau news agency on Wednesday afternoon that the man has been charged with attempted murder and rape.
Police said that the female victim was found battered and partially unclothed.
“She was near death when she was found,” Copenhagen Police spokesman Torben Svarrer said.
Ritzau reported that police believe the man attempted to strangle the woman after hitting her numerous times in the head and face. She is believed to have been raped after losing consciousness, police said.
Svarrer told TV2 news that video footage showed that the man “was in the area of the crime scene” at the time of the attack.
“That, and his behaviour on the video surveillance, led us to arrest the man early this morning,” he said.
Police did not detail how they identified and tracked down the man, saying only that he was arrested “somewhere in Copenhagen”.
No details about the man's identity or nationality have been released but Ritzau reported that a Greenlandic interpreter was called to the preliminary hearing.