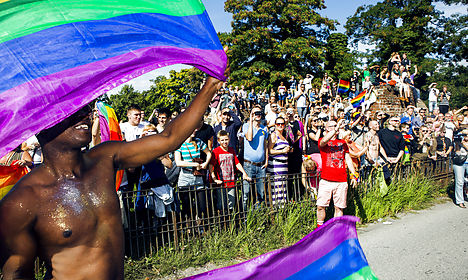 File photo from the 2013 Copenhagen Pride celebrations. Photo: Nikolai Linares/Scanpix
Both the increased participation and extra police measures are the result of the June mass shooting at a gay nightclub in Orlando that left 49 people and the gunman dead.
“Events like the one in Orlando help to increase people’s awareness of the importance of going out and showing support for the LGBT community and human rights as a whole,” festival spokesperson Lars Henriksen told news agency Ritzau.
Organizers reported that 7,092 people have signed up for the Copenhagen Pride Parade on Saturday, 1,300 more than last year and a new participation record for the event.
Final figures are expected to be even higher, as festival spokesman Thomas Rasmussen said that there is always a large number of people who spontaneously join the parade as it gets underway.
“Based on the high participation numbers at this point, we expect that there will be around 35,500 people who join the parade if the weather is good. That’s a lot more than last year,” he told Ritzau.
All of those participants will be under the watchful eye of the Copenhagen Police, which said it would up its presence at this year’s event. Police and organizers told Metroxpress newspaper that the Orlando shooting played a role in security planning.
“It’s clear that we must realize that the general, serious terror threat we face in Denmark means that there is a need for extra manpower, both because there will be a lot of people at the same place and because of the community the participants come from,” police spokesman Jens Jespersen said.
Jespersen did not release details but told Metroxpress that “we have increased our efforts in comparison to earlier”.
“That applies to both the parade on Saturday and the other arrangements that run from [Tuesday] until Sunday,” he said.
A full programme of Copenhagen Pride events can be found here (in English).