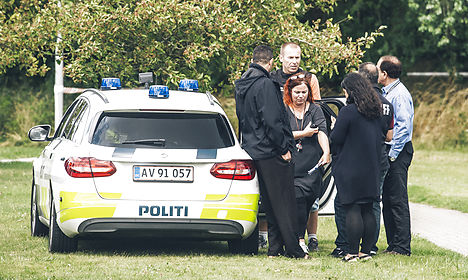 Police said the arrest occurred "without drama". Photo: ndreas Bastiansen/Scanpix
The man was arrested without incident at 1.30pm following discussions with police mediators.
Initial questioning suggested “love worries” may have underpinned the man's threats, police said.
The 22-year-old Iranian resident climbed onto the asylum centre's roof shortly after 11am. Police and rescue personnel arrived at the scene and residents at the centre were evacuated.
The incident took place at Asylcentre Nyborg, which has room for up to 500 occupants.
Aircraft are now once again permitted to fly over the asylum centre after Funen Police earlier established a no-fly zone.
Police said they would not be making any additional comments for the time-being.