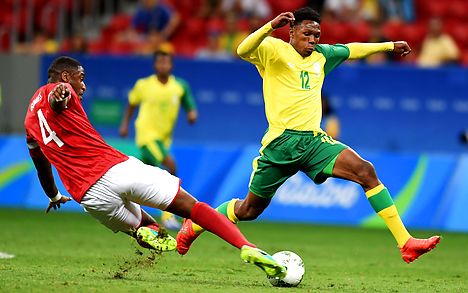 Ediegerson Gomes (left), shown here against South Africa, will try to trip up hosts Brazil's chances at the Olympics on Wednesday. Photo: EVARISTO SA/Scanpix
Gomes will marshall Denmark's defence in Salvador on Wednesday* with Brazil needing to win to ensure they avoid a humiliating group stage exit from Rio 2016.
Yet, the rugged centre-back won't be slow to take Barcelona star Neymar down a peg to continue his Olympic dream.
“I'm a bit of a dirty player,” said Gomes. “Every team needs one and I like the role.”
The 27-year-old, who plays his club football in China with Henan Jianye, turned his back on a burgeoning career as a goalkeeper as a teenager to take up his love of defending learned from a tough upbringing that saw him flee his native Guinea-Bissau only to land in favela-like conditions in Portugal.
“From Bissau, my mother went to Portugal, and then I went with her. I spent five years living in Portugal, but the place where we lived was not nice, it was a slum area, like a Brazilian favela.
“It never happened anything to me living in (the) Portuguese slum, but I saw many things – drugs, police, weapons. Some of my friends, in fact, sold drugs, others have died. Those things are not good for a child to see.”
Gomes was eventually rescued when his father and Danish step-mother took him in.
“My dad and my step-mother, who is Danish, used to sometimes come and visit me from Denmark and decided to take me away from that life. They asked my mum and she agreed.
“It was tough for her but as an African child she knew why I had to leave, in search of a better education and a better life.”
However, he believes it is his tough upbringing that provided him with the tools for an international football career.
“You need to be strong, to be alert. You can't make mistakes because they might cost you your life,” he added.
“I think that's why I like defending and being tough out on the pitch. I'm not in football to make friends.”
As for knocking Brazil off their perch on home soil? Gomes is taking the challenge in his stride.
“You can't take to the field saying to yourself 'well, it's Brazil, I ought to be scared now'. I've never thought like that in my life. You have to go out and play like you always do.”
Gomes's background could even prove beneficial for the sweltering conditions of Salvador after some of his teammates struggled in the Brasilia heat for their opening two matches.
“I moved to Denmark 17 years ago but, of course, my body is better prepared for playing in Brazil's conditions,” he added.
“Today I recognise myself as Danish, but I know that I'll always be a little African.”
* The Denmark-Brazil match will begin at 3am Thursday Danish time.