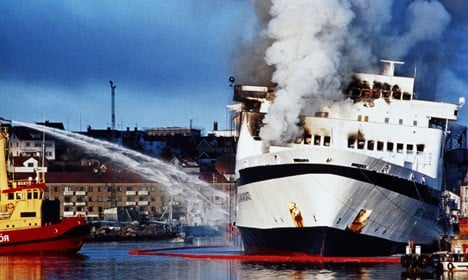 The Scandinavian Star car and passenger ferry caught fire between Oslo, Norway and Frederikshavn, Denmark in the evening of April 7, 1990, killing 159 people. Foto Per Løchen / NTB
Norwegian newspaper VG reported that police will not file any new indictments in the case, something Oslo Police is expected to confirm at a 1pm press conference.
Earlier this year, retired Danish ship inspector Flemming Thue Jensen stepped forward to say that the fatal fire aboard the Scandinavian Star was sabotage.
See also: After 26 years, new info on fatal Scandinavian Star fire
Jensen said that crew members were responsible for the fires that broke out when the ship sailed from Oslo to Frederikshavn in Denmark on April 7th, 1990. The flames claimed the lives of 159 people.
In the new investigation, fire experts Kjell Schmidt Pedersen and Øystein Jæger Meland, who were also consulted in 1990, said that subsequent fires aboard the ship were sparked by the original and not deliberately set by crew members as Jensen alleges.
Jensen said the fire pattern was not random but was “a conscious and planned action” that involved rupturing a hydraulic line. The Danish ship inspector said Norwegian police failed to “follow the money”, insinuating that the fire was set as an insurance scam.
According to Norwegian news agency NTB, the owners of Scandinavian Star received $14 million in compensation following the fires.
But Oslo Police said that the new investigation concluded that the initial fire on the ship led to an intense heat spread in the steel structure of the ship, which ignited combustible materials and gases.
In the aftermath of the fatal 1990 fire, several deficiencies were found amongst the ship’s rescue equipment and the Norwegian captain and two Danish ship owners were put on trial and given short sentences.
Norwegian police initially claimed that the fire was set by Danish truck driver who died in the flames, but charges against him were dropped in 2014 when a police report stated that there was not sufficient evidence of his guilt.
Relatives of some of the 159 people who died campaigned for the case to be reopened, arguing that there is evidence to suggest that the fire was a deliberate arson carried out by the ship's crew.
The fatal fire broke out as the Scandinavian Star sailed from Oslo to Frederikshavn on Friday, April 6th, 1990. Initial reports were that everyone on board was rescued but a few hours later it became clear that a large number of people had not survived.
The ship was pulled to Lysekil in Sweden, where the deceased were retrieved and identified. Most of the victims were Norwegians.
Url copied to clipboard!